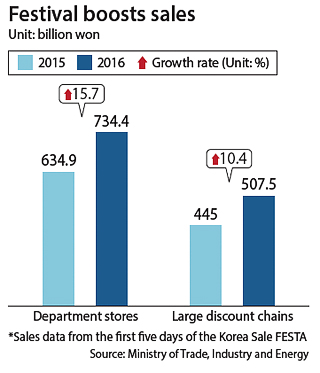 The Ministry of Trade, Industry and Energy said Wednesday that sales at department stores totaled 734.4 billion won ($659.4 million) between last Thursday and Monday, the first five days of the promotional event that the government has dubbed the “Korea Sale FESTA.” This was a 15.7 percent increase from the 634.9 billion won recorded during the first five days of last year’s event.

“There are more retailers and manufacturers participating in the event this year compared to the previous year, and there are more foreigners visiting the country,” said Chung Jong-young, a director at the Trade Ministry.

According to the Ministry of Culture, Sports and Tourism, the number of foreigners who entered the country between last Thursday and Sunday rose 8.9 percent year on year to record 221,000.

“The Chinese accounted for the largest number of tourists visiting Korea, and the number of those from Japan and Middle Eastern countries rose significantly from the previous year,” said Lee Seung-jae, an official at the Culture Ministry.

The data showed that the number of Japanese who entered the country rose 30 percent, and the figure for those from the Middle East jumped 34 percent during the same period.

The Trade Ministry expects this year’s event to have a larger economic effect than last year’s because of the higher number of duty-free stores participating as well as manufacturers like automakers joining the event for the first time.

“Last year’s event [dubbed ‘Korea Black Friday’] was more focused on Koreans residing in the country, but we are trying to attract as many foreigners as we can to participate in the event this year,” said Chung at the Trade Ministry.

Hyundai Department Store also said its sales rose by 15 percent from the previous year, largely thanks to the fall promotion.

Hyundai Motor announced it has already sold all 5,000 units of its Grandeur, Santa Fe and Sonata models, which were discounted for the event. Hyundai added it would have another 5,000 units sold at lower prices during the remainder of the promotion period.

Online retailers are cooperating with couriers to reduce shipping fees during the sale. Domestic delivery charges will be lowered 10 to 20 percent, and customers purchasing goods from overseas will enjoy delivery savings of 33 percent.

Three of the country’s biggest e-commerce retailers, including Coupang and Ticket Monster, also joined this year’s sale for the first time.