Inflation inched up in September with high produce prices

Inflation inched up in September with high produce prices 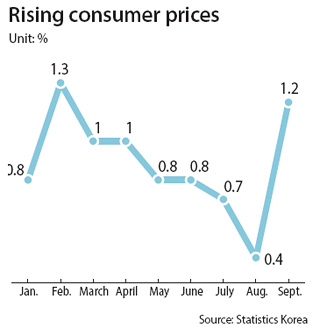 Consumer prices in September increased by more than 1 percent for the first time in five months, thanks largely to fresh produce prices, which were affected by abnormally hot weather this summer.

“Prices of fresh produce rose significantly due to the heat wave that hit this summer,” said Yoo Young-jae, a director at the statistics agency.

The price of napa cabbage rose 196.2 percent year-on-year and the figure for spinach rose 107.5 percent. White radish prices went up 106.5 percent compared to the previous year and the price of bell peppers increased by 109.1 percent, according to the data.

Inflation in petroleum products fell 7 percent year on year as international crude prices remained low compared to the previous year. That contributed to bringing down overall inflation by 0.29 percentage points.

The price of gasoline and diesel dropped 4.8 percent and 15.3 percent each in September compared to a year ago. This helped overall prices for electricity, water and gas drop by 13.9 percent, and it contributed to bringing down overall inflation by 0.64 percentage points.

“The government’s decision to give discounts on household electric bills from July to September helped the price of electricity decline in general,” said Yoo.

Tuition costs at private educational institutes for high school students jumped 3.1 percent in September compared to a year ago.

By region, consumer prices increased the most in Busan, by 1.6 percent, followed by Daegu at 1.4 percent. The inflation rate was the lowest in Daejeon, 0.5 percent.

The government warned that kimjang, or kimchi-making season, is coming in November.

“We believe vegetable prices will stabilize this month as goods newly harvested last month start to come out in the market,” said Yoo Soo-young, a director at Ministry of Strategy and Finance.