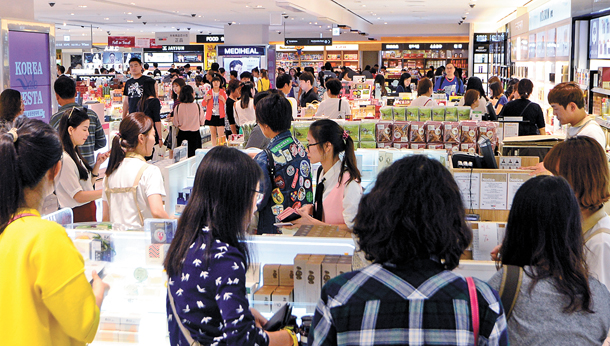 Five conglomerates are squaring off over three duty-free licenses in Seoul.

Fierce competition is expected as all contenders have established retail networks. Lotte and SK Networks are trying to regain licenses they lost last year.

SK Networks put forward a massive investment plan that includes construction of a 170 meter-long pool and spa facilities within the next two years, injecting 600 billion won over five years. “By 2021, we will achieve 7.05 million foreign visitors to our shop annually and 1.5 trillion won in revenue,” said Representative Director Moon Jong-hoon of SK Networks.

Hyundai Department Store expressed interest in opening a duty-free shop in its branch in Samseong-dong, southern Seoul near City Air Terminal and SM Town, an entertainment space run by SM Entertainment. It has plans to sign memoranda of understanding with 17 tour agencies in China to attract 2 million Chinese visitors annually.

Shinsegae DF has selected Banpo Central City in Seocho District and plans to make the venue a one-stop cultural complex.

HDC Shilla Duty Free, a joint venture between Hyundai Development and Hotel Shilla, is eyeing I-Park Tower in Samseong-dong to make it a technology-oriented shop where customers can experience services related to IT.

Final winners are to be announced in December.