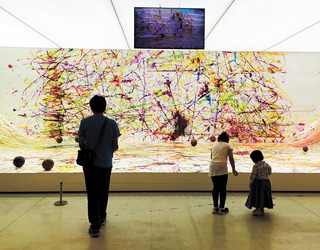 Among them, Ham presents an installation work that looks like a gigantic abstract expressionist painting. In fact, it was created from the artist’s collaboration with a boy who is a North Korean defector. The boy, now playing on a youth football team, kicked balls covered with colors that the artist prepared so that the traces of the balls are made like brush strokes of diverse colors.

As for Kim, he has constructed a life-size two-story building - a replica of the artist’s studio - that the visitors can enter and explore. The viewers will find drawings in the building and, also from the building’s window and small terrace, they will see thousands of drawings hanging on the black wall of the museum.

Back explores new aspects of photography which the artist thinks is no longer records of facts but just pictures or images. The team known as mixrice deal with the issue of migration, in particular the reality of migrant workers in Korean society.

To Sunday: This is a rare art market operated by artists, with all the proceeds from sales going to the artists.

Seventy-eight artists will present about 400 pieces of work at affordable prices and many of them will present the works in reproductions of their studios. The participants include up-and-coming artists who won major art prizes over the recent years such as Lee Wan and Choi Sun. The director of the fair is installation artist Dusu Choi.

To Nov. 6: This exhibition features 40 pieces of ancient Korean paintings, sculptures, documents and artifacts related to Buddhism. Among them are seven designated National Treasures.

Buddha, the Dharma (teachings of Buddha) and the Sangha (community of practicing Buddhists) are the “Three Jewels” of Buddhism, and the exhibit is divided into three sections, each of which focuses on one of these aspects.

To Nov. 20: Yeongang Gallery, the first-ever art gallery within the civilian control zone adjacent to the North Korean border, opened in May with a solo show by artist Han Sungpil. It features 11 of his photos, including “Observation,” and video works including “Uncanny Serenity.”

The donation, called the Gana Collection, consists of 200 paintings, sculptures and prints by 48 local artists related with the minjung art movement of the 1980s and early ’90s. The movement is represented by realist paintings with strong political or social messages against the Korean military regime of the ’80s.