Lagerfeld critical of Kardashian for being too flashy

Lagerfeld critical of Kardashian for being too flashy 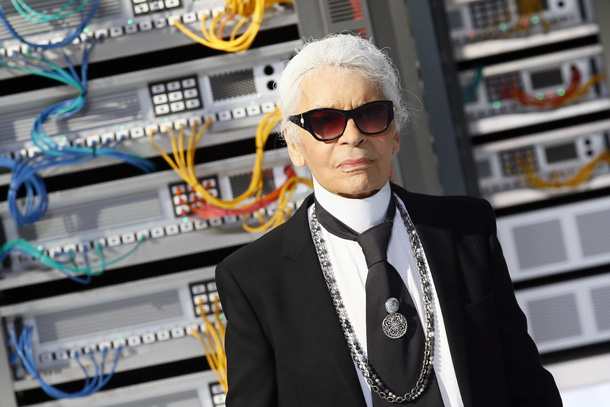 PARIS - Fashion icon Karl Lagerfeld criticized Kim Kardashian to The Associated Press for being too flashy with her money following her $10 million heist, while Usher brushed away safety concerns around the ordeal that continued to dominate Paris Fashion Week.

Chanel’s couturier suggested that Kardashian was partly to blame for the heist, in which the reality television star was tied up and robbed of millions of dollars of jewelry.

“(She is) too public, too public - we have to see in what time we live. You cannot display your wealth then be surprised that some people want to share it,” Lagerfeld said after the Chanel show.

“I don’t understand why (Kardashian) was in a hotel with no security and things like this. If you are that famous and you put all your jewelry on the net you go to hotels where nobody can come near to the room,” he added.

Usher has stayed at the Kardashian heist residence

The U.S. singer who arrived in Paris hours after Kim Kardashian was tied up and robbed of $10 million worth of jewelry and is familiar with the residence it occurred in says he’s defiant in the face of the crime.

“I feel more secure than ever, absolutely (safe),” said the 37-year-old singer, who told the AP he has stayed in the No Address Hotel where the heist occurred and said it still remains a secure environment.

The No Address Hotel or L’Hotel de Pourtales, is a favorite of A-list celebrities, with past guests reportedly including Leonardo DiCaprio, the late Prince, Madonna, Jay Z and Beyonce.

“It’s very unfortunate that that would be the one thing that would represent this incredible week of fashion, so I hope that it doesn’t overshadow,” he said.

“(Gun crime) like that happens all the time. In America people get robbed everywhere, man. Unfortunately it does maybe take a celebrity to shine a light on unfortunate situations,” he added.

Courtney Love is unfazed despite being attacked in Paris last year

Courtney Love, who sat next to Kardashian at the Givenchy show on the eve of the robbery, spoke of her profound shock.

But she said that it wouldn’t make her reconsider coming back to the City of Light.

“As a friend of hers, I feel very horrified... I don’t know what went on with security,” she said.

“It was terrible... (But) I don’t see the underbelly so much. Maybe I should more. It’s a bubble for me,” Love told the AP from the Chanel front row.

But only last year, the former Hole singer wasn’t so unfazed by Paris turmoil, when she had her car attacked by striking taxi drivers.

“The Uber thing, that was terrifying,” she acknowledged at Tuesday’s show.

Last June, Love made headlines by tweeting: “They’ve ambushed our car and are holding our driver hostage,” and “They’re beating the cars with metal bats. This is France?? I’m safer in Baghdad.”

It set the tone for a technological, futuristic collection that riffed on the vivid colors of the cables in the backdrop.

The exploration of the house DNA led on to youthful styles that were opened up and airy on models in hip-hop-style caps.

Skirt suit jackets sported square Velcro fasteners, instead of buttons, with skirts with a sexy split down the front.

“Velcro is so much easier than a button,” Lagerfeld said.

He characterized the collection designs as “intimate technology” femininity hidden behind something high-tech.

Some styles evoked the busy textured surface of a circuit board with the ultra-vivid colors of computer circuitry. At times, it was a little too-much, as in one loose black, pink and purple double-breasted jacket on which the colors emanated out in blurred lines like overheated wires.

Elsewhere it worked, like a tight black jacket with silver solder-like markings.

Giorgio Armani decided on the one-off event in the City of Light this season to celebrate the restyling of the brand’s boutique and its cafe in Paris’ Left Bank area, Saint Germain. Emporio Armani shows are presented in Milan.

The exhaustive 85 looks, with both male and female designs, presented a more wearable vision of fashion than the shimmering gowns fashion insiders are used to at the Armani Prive couture shows that are held in Paris.

Menswear jackets on female models was a repeat theme in the diverse show, which was given a funky edge by models wearing shades with tight, rope-like pigtails hanging down the torso.

Armani’s typically tasteful tonal shades of blue, gray and red mixed up with myriad shimmering pajama looks with elephant motifs that evoked the silks of India.

The show was clearly a celebratory event, but could have benefited from increased brevity.

In Kenzo’s Tuesday show, designers Carol Lim and Humberto Leon christened this season’s look of the oversize wide round shoulder and with a high tight waist in a strong display that emphasized the silhouette.

A thick khaki safari-like outfit with huge curved voluminous shoulders sporting utilitarian pockets was among one of the 51-piece collection’s first looks and was, in true funky Kenzo style, topped with a chic Victorian-style high collar.

Voluminous, almost Sinbad, pants tapered finely at the waist in another look in deep navy.

One raincoat-style dress, gathered at the waist with toggles and capped with a mid-calf underskirt, was a standout. It produced beautiful, delicate ripples that flowed down the torso.