The Mangyeongdae, in the southern part of Mt. Seorak, opened for the general public’s entrance on Oct. 1 for the first time in 46 years after it shut down in March 1970 to preserve the natural environment. [PARK JIN-HO]

The breathtaking views from Mt. Seorak National Park in Gangwon province are among the most beautiful in the country, and attract crowds of hikers throughout the year. But for those who have always yearned for something more, the Mangyeongdae, in the southern part of Mt. Seorak, opened for the general public on Oct. 1 for the first time in 46 years.

The Mangyeongdae, which, when translated, means a spot where one can see ten thousand grand views, has been restricted for decades in order to preserve the natural environment. About a week before it opened for the public, this reporter had a chance to make a visit.

To make the trip to the Mangyeongdae safe and enjoyable for visitors, Korea National Park Service (KNPS) has installed a safety fence and an observatory deck made of wood, with informative signs to explain the scenery.

“Mt. Seorak has been designated as a national park since March 1970,” said Jeong Chun-ho from KNPS. “So nobody has stepped foot on the the Mangyeongdae for the last 46 years. [KNPS] is very glad to be able to share this beautiful scenery with so many people.” 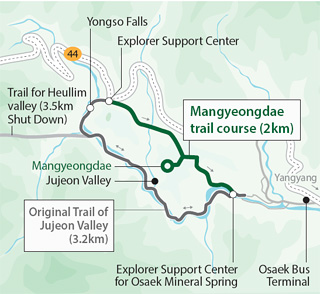 As long as the spot has been restricted, all the nature surrounding it has been well-preserved. Pine trees 60 centimeters (23.6 inches) in diameter and 20 meters in height stand straight amid the uniquely-shaped rocks.

On the left of the Mangyeongdae is the Baekdudaegan mountain range, which runs along the entire length of the Korean peninsula, from Mount Baekdu along the China-North Korea border to Mount Jiri in the south. Right below is Mt. Jumbong, which faces the Daecheong peak of Mt. Seorak, and also is at the center of the southern section of Mt. Seorak. Mt. Jumbong is in fact the starting point of Daecheong peak.

On the right side of the Mangyeongdae is Hangyeryeong Pass, which connects Inje County and Yangyang County in Gangwon, and Mt. Seorak’s Northwest Ridge. Jujeon and Heullim valleys, which are a few of the most famous spots at Mt. Seorak, can also be found below.

Those who have heard the folktale with the backdrop of Jujeon valley will find the visit even more interesting. The story unfolds as a provincial governor of Gangwon passes near the valley and suddenly hears the sound of iron being tapped. Wondering where the sound comes from, the governor sent his servant to look for the place where the sound had come from. The servant discovered that a group of 10 people were making forged yeopjeon, old-fashioned Korean brass coins, inside a cave. The governor decided to punish those 10 people and also got rid of the cave. Since then, the place got the name Jujeon valley, as Ju stands for tempering a metal and Jeon represents money in Chinese characters.

Top: A natural road made of Fragrant Snowbells on the way from the Explorer Support Center for Yongso Falls to the Mangyeongdae in the southern part of Mt. Seorak. Middle: Osaek Mineral Spring, where the surrounding rocks’ colors have turned reddish due to the iron contained in the water. Bottom: Yongso Falls which has a legend that says the waterfall and rocks are what’s left of a 1000-year-old Imoogi that wasn’t able to become a dragon.

Before the Mangyeongdae opened to the public, Heullim valley was one of the most popular spots for the climbers of south Seorak. However, access to the valley was forced to be restricted in November due to frequently falling rocks.

As autumn, the peak season for Mt. Seorak approaches, a Yangyang county social service agency has urged the KNPS to reopen Heullim valley. KNPS decided not to comply with the agency’s request, but instead has opened the Mangyeongdae, though it has yet to be determined for how long.

“The shutdown of Heullim valley has hugely influenced the local economy, which is why the Mangyeongdae opened in a rush,” said Jeong from KNPS. “Although it is unfortunate for visiting tourists to not be able to enjoy the scenery of Heullim valley, they are instead given a chance to explore a more interesting trail, where they can enjoy walking and climbing at the same time.”

When this reporter visited the Mangyeongdae, safety facilities were still under construction, but when finished, rope and wooden stairs will be installed. The 2-kilometer (1.24 mile) trail offered to the public this autumn is mostly a downhill route.

Hikers on the newly opened trail will also be impressed by a cliff on their way to reach the Mangyeongdae that is as significant as the Zhangjiajie in China. It will take around an hour and a half to go through the trail. Throughout the hike, many varieties of well-grown trees and plants such as painted maple, wild-walnut tree and dogwood have been planted.

“The newly opening trail course is very easy,” said a 72-year-old local resident Lee Jeong-sik. “Everybody young and old will be able to hike the trail without much difficulty.”

There are also a lot of attractions to enjoy on the trails at Mt. Seorak. At the Osaek Mineral Spring located at the beginning of the course, for example, mineral water which is carbonated and fortified with iron soars up out of the ground. Possibly due to the iron, rocks surrounding the mineral spring have turned reddish.

About 1.5 kilometers away from the spring is Yongso Falls. There is also an interesting story behind this attraction. According to legend, there were two Imoogis, mythical creatures that live underwater that desire to become dragons but are unable to due to being cursed. The two mythical animals - one female and the other male - were 1000 years-old, and were preparing to ascend to heaven by becoming real dragons. However, only the male was able to turn into a dragon, and the female became a solidified rock and a part of the waterfall at Yongso Falls.


Mangyeongdae within Mt. Seorak are sights to see

There are three Mangyeongdaes at Mt. Seorak National Park.

At the eastern part of the mountain is a Mangyeongdae located in the middle of a 1320-meter peak named Hwachaebong. At this spot, Scenic Site 101 Cheonbuldonggyegok Valley, dotted with countless rocks and rocky peaks, as well as a series of small waterfalls, can be viewed.

Most of the rocks at these sites are made of granite. There is also granite porphyry and pink granite at these locations.