Samsung reshuffle on the horizon

Samsung reshuffle on the horizon 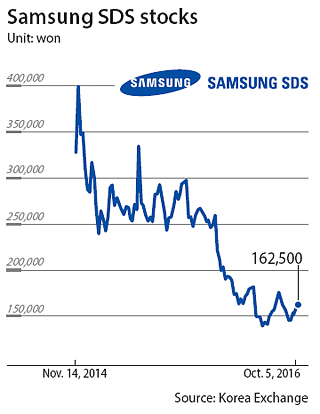 After saying in a regulatory filing on Sept. 30 that nothing has been confirmed about the plan to split its logistics unit, Samsung SDS’s share prices have fallen for two straight trading days.

A day before the filing, stocks shot up 9 percent, buoyed by investors’ expectations that structural reform at Samsung was imminent. Even though Samsung SDS rebounded 7.62 percent to close at 162,500 won ($145.87) on Wednesday, the fluctuating prices are symptomatic of the company’s importance to the Samsung empire.

The nation’s No. 1 conglomerate has been experiencing a major overhaul in the past two years as Samsung Electronics vice chairman Lee Jae-yong gradually assumes control from his bedridden father, Lee Kun-hee.

Currently, the son owns a mere 0.6 percent stake in Samsung Electronics, and even if he inherits the entire 3.4 percent stake his father owns, the combined shares in the tech giant will stand at only 4 percent.

“It’s a major task of the Samsung Group to help vice chairman Lee maximize his stake in Samsung Electronics,” said a person familiar with the situation at Samsung.

A 1-percent stake in Samsung Electronics, based on Wednesday’s closing price of 1.619 million won, translates to 2.29 trillion won. That is slightly over one-third of Lee’s personal assets of 8.1 trillion won, which made him the world’s 179th-richest person, according to Bloomberg data at the end of last year. The data also means increasing his stake at the No. 1 smartphone producer will not be such an easy task, even after he mobilizes his private fortune.

That is why SDS is so crucial. Lee owns a 9.2-percent stake and his two sisters - Lee Boo-jin, CEO of Hotel Shilla, and Lee Seo-hyeon, head of Samsung C&T’s struggling fashion division - possess a combined 7.8 percent, which makes their total ownership 17 percent. Samsung Electronics has a 22.6-percent stake in SDS and Samsung C&T, 17.1 percent in SDS.

His siblings’ relatively larger stake in SDS than in other Samsung subsidiaries has naturally raised speculation among analysts that Lee Jae-yong will boost his share ownership in SDS and replace his shares in the company with those in Electronics.

In the past couple of years, rumors have been ripe about Samsung SDS ultimately spinning off its logistics unit, although existing shareholders may retain the same portion of stake in the separated business unit as well as the original company, even after the spin-off measure.

One scenario commonly bandied about is that Samsung Electronics will be separated into two units: an investment division, to serve as a holding company, and a business division. Then the former will merge with the logistics arm of Samsung SDS, while the latter will join with the IT service arm of Samsung SDS.

Lee Sang-hun, an analyst at Hi Investment & Securities, says the method will be the “easiest way to exchange Lee’s stake in Samsung SDS for a stake in Electronics.”

That way, Samsung Electronics will be able to step up its dominance in Samsung SDS’s IT service unit, whereas Samsung C&T will do likewise with Samsung SDS’s logistics unit. And all this will eventually prop up vice chairman Lee’s control over Samsung Group.

At Wednesday’s closing price, that 17-percent stake is worth 2.14 trillion won, which is still less than the value of a 1-percent stake in Samsung Electronics. Samsung SDS hit an all-time high of 429,000 won last Nov. 28.

“When Samsung SDS will make public the spin-off plan depends on the share price flow of both Samsung SDS and Samsung Electronics,” said an industry insider. But a Samsung SDS executive said the possibility of Samsung SDS coming up with the plan by the year’s end is “low.”