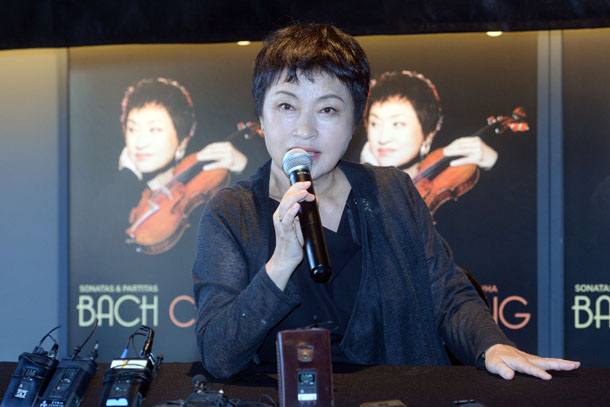 “I am happy,” Chung said during a press conference held by the record label Warner Classic on Wednesday at the ODE Maison in Gangnam, southern Seoul.

“Though my fans have waited to hear me perform Bach for a long time, I apologize that they had to wait until now. It feels surreal, however, seeing the record actually completed.”

Chung made her debut in 1970, which was during a time when Asians in general were unseen among the musical elites. However, her performance at the London Symphony Orchestra allowed her name to reverberate internationally. According to the violinist, recording Bach was a lifelong dream of hers, claiming the composer to be “timeless.”

Chung said she is still recovering from a hand injury from 2005. Regardless, she will hold a recital of her latest offering at the Seoul Arts Center on Nov. 19.

“There’s no stopping me,” she said. “I’ve encountered many slumps during my 64 year career, but my love for music always made me return.”