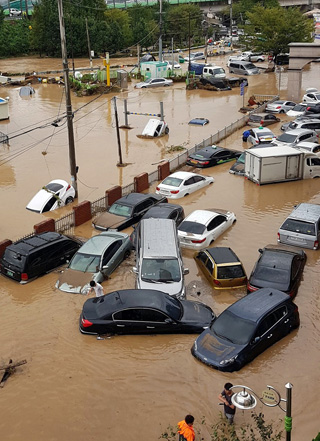 Vehicles are submerged in a parking lot near the Taehwa River in Ulsan Wednesday as the river flooded due to the impact of Typhoon Chaba, which headed toward Japan later. [NEWSIS]

According to the Ministry of Public Safety and Security, 1,183 hectares of farmland was flooded in South Jeolla, 950 cars get trapped in water in Ulsan and Jeju, and some 210,000 houses lost power in Jeju, South Jeolla and South Gyeongsang.

According to authorities, four people died and two went missing on Wednesday.

According to Busan police, a 90-year-old woman fell from the rooftop of her house in Mangmi-dong due to strong winds and died. A 59-year-old construction worker died when he was crushed by a falling crane at a construction site at Kosin University. A 56-year-old surnamed Heo, who was reportedly checking whether his boat was fastened to a breakwater in Daehang-dong, was swept away by waves and later found dead.

A resident of Ulsan was found dead some 60 meters (197 feet) from his apartment entrance, and a rescue worker in Ulsan and a fisherman in Jeju went missing, according to local authorities.

When the typhoon landed in Busan around 11 a.m. Wednesday, the waves - some as high as 4 meters - flooded over the breakwater and poured into the streets of high-rise apartment complex Marine City in Haeundae District. Videos posted by residents and passersby on social media showed seawater flooding the streets like in a disaster movie. 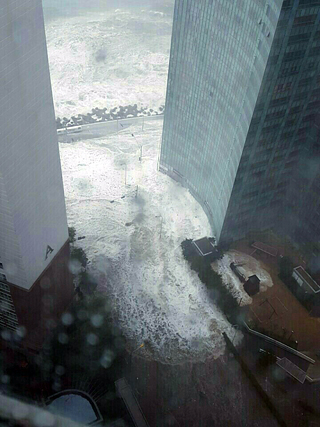 Waves similar to a tsunami caused by Typhoon Chaba slammed into the Marine City high-rise buildings located next to the sea in Busan on Wednesday. [NEWSIS]

The waves brought more than seawater onto the streets.

“I ran to a building to escape the waves,” said a 35-year-old resident surnamed Ryu. “When I came out again after the water subsided, there were fish flapping around on the road.”

Photos of freshly caught fish on the flooded streets of Haeundae went viral.

Accidents took place when structures could not withstand the winds.

A 9-story steel parking garage collapsed under the strong winds around 11:30 a.m. in Beomil-dong of Dong District, destroying four vehicles inside and three outside. There was no casualty, though a 12-year-old boy was hurt and received treatments at a nearby hospital. Property damage is expected to climb over time.

In Ulsan, rain fell at 139 millimeters per hour (5.5 inches per hour) Wednesday morning, flooding streets in Shinjeong-dong and at the Taehwa Market. The underground parking lot of an apartment complex in Ulju County flooded, ruining some 900 vehicles parked inside.

In areas at risk of floods, authorities restricted vehicle entrances in advance.

Until around 1 p.m. Wednesday, Busan police stopped vehicles from crossing Geoga, Guseo, Namhyang, Gwangan and Eulsukdo bridges and entering the seaside street of Gwangalli Beach. South Gyeongsang police stopped vehicles from passing through seaside streets of Masanhappo District and Jinhae District, and Ulsan police restricted entrance to some 19 bridges and roads in the city.

Trains and flights were paralyzed by the typhoon.

According to the Korea Airports Corporation, 42 flights departing from Jeju International Airport were cancelled in the morning, leaving some 6,500 passengers stranded for hours.

The Korea Railroad Corporation suspended trains after a banister was knocked down by the wind and hit a train track in Ulsan Station. Trains from Singyeongju Station to Ulsan Station, and from Ulsan and Busan to Seoul were out of service from 12:30 p.m. to around 3 p.m.

Some 99,000 households went dark in Geoje, Miryang, Tongyeong, Hadong and Namhae of South Gyeongsang on Wednesday morning. Some 51,000 households in Jeju Island also lost power due to the typhoon for a few hours. According to the Korea Electric Power Corporation, some 70 percent of roughly 210,000 households experiencing blackouts throughout the country had power restored by 2 p.m. Wednesday.

According to the Ministry of Education, 2,667 schools in Busan, Ulsan and South Gyeongsang declared holidays on Wednesday. It is rare for a typhoon of this size to hit the Korean Peninsula at this time, experts said. According to the KMA, only eight typhoons out of 327 that affected Korea between 1904 and 2010 landed in October. “It is unorthodox for a typhoon this strong to hit Korea in October,” said Moon Il-joo, a professor in the department of marine industry and maritime police at Jeju National University. “Typhoon Chaba maintained its strength as it passed through the warm waters south of Jeju and followed the Kuroshio Current.”

Typhoon Chaba will continue to travel northeast and pass through Sendai, Japan, in the early hours of Thursday morning.