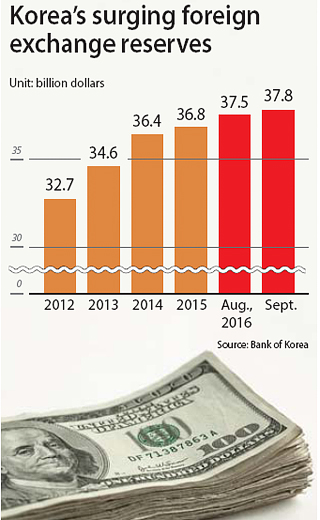 Korea’s foreign exchange reserves hit an all-time high in September on improved returns from investments in foreign assets and a relatively weak dollar that bumped up the value of other foreign currency holdings including yen and euro.

The nation’s foreign reserves reached $377.8 billion, up nearly $2.3 billion from the previous month, the Bank of Korea said on Thursday.

The latest reading marks a winning streak for two consecutive months, following the previous month that saw a then-record high of $375.4 billion.

The economist also said a weaker dollar contributed to the nominal value increase.

“The dollar also depreciated [against other foreign currencies] due to anticipation for a rate hike by the U.S. Fed. That contributed to increasing the nominal value of other major currencies that we hold,” he said.

In September, foreign-denominated securities, which account for more than 91 percent of foreign exchange reserves, experienced a steep fall, though the loss was offset by a huge rise in foreign currency deposits.

The holding of securities lost $2.1 billion to $342.7 billion over the previous month. Foreign currency accounts, which account for 6.9 percent of the foreign reserves, added $4.4 billion to reach $25.9 billion.

The country’s reserve position at the International Monetary Fund also declined by about $10 million to $1.8 billion.

Korea’s foreign reserve shrank for four consecutive months starting in November 2015 before bouncing back in August.

Holdings in gold bullion remained unchanged at $4.79 billion during the same period, the statement said.

Meanwhile, the BOK said Korea was the world’s seventh-largest holder of foreign exchange reserves as of the end of August, after China, Japan, Switzerland, Saudi Arabia, Taiwan and Russia.