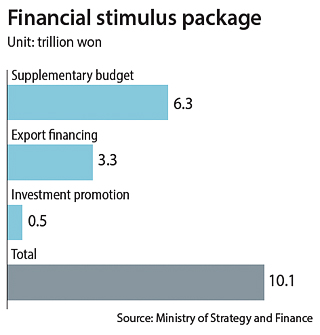 The government unveiled a stimulus package worth over 10 trillion won ($9 billion), which includes 6.3 trillion won on the top of 16.6 trillion won supplementary budget to be used in the fourth quarter of this year, as an attempt to meet the economic growth-rate goal of 2.8 percent.

The government believes it is necessary to come up with an additional stimulus package in the wake of the so-called Kim Young-ran Law to prevent graft, the Ministry of Strategy and Finance said Thursday, as well as ongoing corporate restructuring in the shipping and shipbuilding industries.

“The economic data for retail sales and the service sector has improved from the past but exports and mining and manufacturing output continued to be slow due to the ongoing strike in the automotive industry and corporate restructuring in shipping and shipbuilding industries,” said Yoo Il-ho, minister of strategy and finance.

Yoo added, “The government came up with the stimulus package worth over 10 trillion won this time by taking every possible measure to do so and we will use it to improve the economic condition in the fourth quarter of this year.”

The government said it will have a 6.3-trillion won supplementary budget and will expand the budget used for helping exporting companies to invest in emerging markets by another 3.3 trillion won this year.

“The government’s decision is similar to the squeeze bunt in baseball,” said an official at the Finance Ministry, “ meaning that we are doing it in order to maintain the economic growth rate goal of 2.8 percent this year.”

The government has lowered its prediction from 3.1 percent, set earlier this year, to 2.8 percent in July, and came up with a 20-trillion won financial stimulus package back then as an attempt to meet the new economic growth rate.

The government also plans to boost domestic sales by having credit card service providers ease some of the limitations of using reward points to buy goods.

The Finance Ministry said it is considering transferring the points one saves into actual money and to have card service providers alert customers more often ahead of their reward-points expirations.

According to the government, reward points given to credit card users reached 2.5 trillion won in all, but some 133 billion won in points expired without being used.

“Consumer sentiment is likely to become weakened due to the Kim Young-ran Law and investments, exports and production might be dragged down due to the Hanjin Shipping’s restructuring and strikes in the automotive and train sectors,” said Finance Minister Yoo.

Yoo added, “I believe such labor unions have high salaries and stable working conditions and their strike is nothing more than an act of collectivism. I urge them to return to the work.”