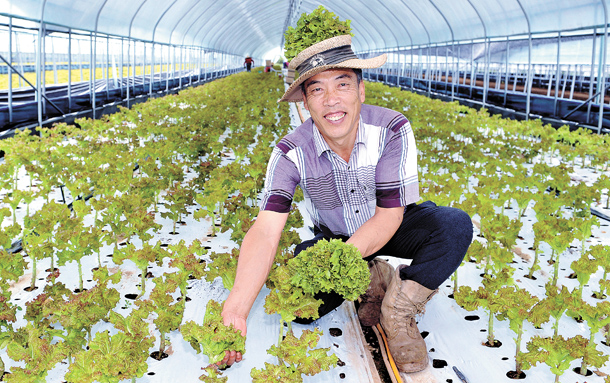 Jangan Farm, in Chungju City in Northern Chungcheong, cultivates leafy vegetables in the traditional way of feeding organic vegetables to livestock and using their waste as manure. Its revenue last year was 14 billion won.

Although its production is traditional, this farm is deemed a model for “smart-farming” in terms of distribution.

Smart-farming by definition is to apply information and communication technology in controlling the growing environment of plants or animals. Its purpose is to enhance productivity and quality to lower costs.

Jangan Farm’s “smartness” is not exactly a prototype, because it is grounded not in production facilities, but its distribution center, for which 4 billion won was invested in the last 10 years.

“Every morning, 150 or so cooperative farms send over 20 tons of organic vegetables to this distribution center. Once they arrive, they are packaged into smaller bags and delivered nationwide,” said Jangan Farm CEO Ryu Geun-mo. “We are one of the few farms in Korea that run a large-scale distribution center.”

The center is equipped with an enterprise business-management system that automatically records information of where the crop was produced and where it will be delivered to. The products go through sample tests every day to check if they have any problems. After their records are fully input, these organic leaf vegetables are sent to 47 E-Mart stores nationwide, several Nonghyup stores and restaurants such as Shinsegae Food’s Korean buffet, Olbaan.

Delivery orders can be made via both online and directly. “We have employees working in direct shops at E-Mart branches-they input orders through smartphone every day after checking the required amount,” Ryu said. This reduces the amount of leftover products.

Ryu has made multiple efforts to seek new ways of distribution since he established Jangan Farm in 1996. “Not so long after I opened the farm, I participated in a wholesale market once and was shocked to see a box of chicory sold at only 900 won per box,” he said. “After that, I never went back.”

To expand distribution routes, Ryu knocked on doors of marketplaces that set up inside apartment complexes in Seoul, but was kicked out many times. After various attempts, he eventually became the first farmer to sell organic vegetables online. The business started to take off as he signed a deal with one E-Mart branch.

In 20 years, the farm expanded from 990 to 528,000 square meters with more than 140 greenhouses. The number of employees working in Jangan’s farm, distribution center and direct shops inside supermarkets totals 178 people.

Jangan Farm was Ryu’s first business after his failure in the landscape architecture industry, which left him with nothing but 1 billion won in debt. He chose leafy vegetables as the next business venture, judging that it was the easiest crop to be liquidated. Jangan Farm first earned recognition in the industry when it started to use the traditional farming methods in 2004, producing organic vegetables based on the ecologic cycle.

Ryu himself was recognized by the government when he became the first person in the farming industry to receive the Gold Tower as Order of Industrial Service Merit, a national certificate given to contributors of Korea’s industry development.

Smart farms are rising as a solution to Korea’s farming industry whose revenue have been stagnant due to decreased population and aging. The government and wireless operators are also chipping in to help its diffusion.

Meanwhile, some farmers oppose the idea of major companies taking part in this new wave. IT service provider LG CNS, for example, recently cancelled plans to build a smart farm complex in Saemangeum, North Jeolla, following strong opposition from farmers. Dongbu FarmHannong went through the same experience back in 2013 when it also gave up a smart farm.

“The reason farmers are against the idea is because they worry it will consequently decrease their share of earnings,” said Ryu. “Farmers in general have certain fear towards major companies.” He seemed careful to comment further on major companies participating in agriculture via smart farming.