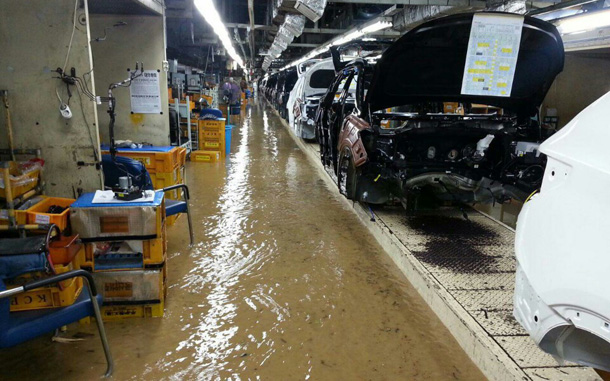 The production line at Hyundai Motor in Ulsan flooded by the heavy downfall on Wednesday in the southern regions of the peninsula. The Korean automaker, which has suffered from strikes since July, had to close production lines for two days. [NEWSIS]

Hyundai Motor production is once again bruised as some of its main plants in Ulsan were hit hard by Typhoon Chaba, which passed through the southern part of the peninsula on Wednesday.

Two of the five plants in Hyundai Motor’s Ulsan factory complex, responsible for 44 percent of the company’s global production, suspended operations Wednesday due to flooding.

The first plant, which produces the Accent and Veloster vehicles, resumed production later in the day, but the second plant which manufactures the more popular Avante, Santa Fe and i40 couldn’t resume operations until Thursday evening. The second factory is situated relatively low compared to the first factory.

An Ulsan plant spokesman said the maintenance check-up was still ongoing, with the objective of finishing work by 7 p.m. Thursday. “If the facilities run normally, the factory will resume right back to work, however, if not, the inspection may last longer,” the spokesman added.

The Hyundai Motor facility was the only major factory in plant-rich Ulsan that suspended its production for two days. A total of 22 factories in the region experienced flooding from the typhoon.

Hyundai Motor said its inspection was prolonged because the muddy water flooding the facilities took longer than expected to clean up.

The day-and-a-half suspension at Ulsan plants has reportedly cost Hyundai Motor more than 1,500 vehicles that were supposed to be manufactured during that time.

The delivery center, which had housed hundreds of completed vehicles scheduled to be transported to new car owners, were partially submerged. Hyundai Motor said the vehicles will not be delivered but will be used for research purposes internally.

However, since the corrosion and rust that comes from water damage to internal auto parts is not easily detectable but could easily lead to severe malfunctions, consumers are already showing concern toward purchasing vehicles from Ulsan.

After the typhoon broke, the finished cars were moved to the upper shelves of the factories, but the flooding exceeded expectations.

The natural disaster came at an unfortunate time for Hyundai Motor as the company was already facing a deadlock with its unions over wage increases after 24 walkouts so far.

The Hyundai Motor union instituted a full-face walkout last week for the first time in 12 years. Almost two-dozen other partial strikes have taken place since mid-July, costing the company more than 2 trillion won ($1.79) in production losses.

The government strongly proposed that both sides settle the negotiation, citing huge national losses generated from the walkouts at the nation’s biggest automaker. Workers have since returned until Tuesday, pending wage negotiations with management.

The union of Hyundai Motor, one of the nation’s most outspoken labor groups, said the government’s intervention will result in full-face strikes of not only Hyundai Motor but also its affiliates including Hyundai Mobis, Kia Motors and Hyundai Steel.