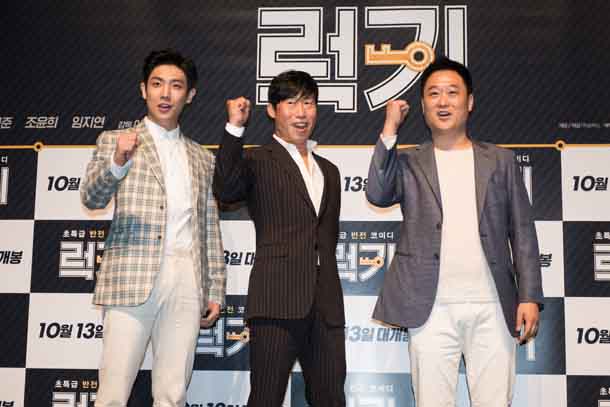 In the last few months, Korean blockbusters such as the historical spy film “The Age of Shadows” and the latest action-filled crime thriller “Asura: The City of Madness” have hit local theaters, soaring up to the number one spot at the local box office upon release. Despite their cinematic quality, however, some have found these films to be too heavy. For those looking for lighter fare, the upcoming action-comedy “Luck-Key,” a remake of the Japanese film “Key of Life,” helmed by Lee Gye-byeok (“The Beast and the Beauty”), will be a good choice.

“Many movies released recently are a little heavy,” said Lee at the press preview held at Dongdaemun Megabox in central Seoul on Tuesday. “I hope people can feel a sense of comfort by watching this relatively delightful film.”

Starring Yu Hae-jin, the film centers on a hired assassin, Hyeong-wook (Yu), who one day completely loses his memory after hitting his head at a public bathhouse. After the incident, a poor, unknown actor Jae-seong (Lee Joon) who is also in the bathhouse, takes advantage of the killer’s memory loss and swaps locker keys with him.

Hyeong-wook, who begins to believe that he is the actor, starts living out Jae-seong’s life. He takes a part as an extra in a drama while also working part-time at a kimbab (seaweed-rolled rice) eatery run by the family of an ambulance worker Rina (Yoon So-hee), who later becomes his romantic partner.

The journey of Hyeong-wook trying to find out who he is by jumping into a different person’s life hilariously has the killer in his 40s believing that he is at least 10 years younger.

The comedy doesn’t stop when Jae-seong’s crush Eun-ju (Lim Ji-yeon), turns out to be the killer’s target.

The action-comedy is also a heartwarming movie as it follows two men learning to pursue their dreams: the cold-blooded killer becomes a passionate actor while the hopeless actor finds a new lease on life and continues to follows his dreams.

“My hope is that instead of merely giving people laughs, I hope audiences find the movie heartwarming,” said the filmmaker.

In one scene, Hyeong-wook remembers that he was a killer and convinces his clients, who had paid him to assassinate Eun-ju and Jae-seong, that all three are dead. Soon after, he goes on to film a popular drama to be aired across the nation. Although “Luck-Key” is unrealistic in some ways, it is an entertaining movie that does not confuse viewers with a complicated storyline.

The action-comedy is slated to hit theaters on Oct. 13, and is rated 15 and over.