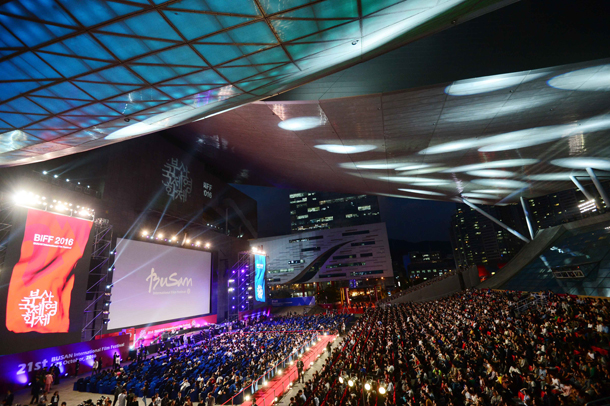 Busan International Film Festival, which has grown into Asia’s largest and most prestigious film festival, held an opening ceremony on Thursday to kick off its 21st edition. [NEWSIS]

The 21st edition of the Busan International Film Festival (BIFF) kicked off in the southern port city on Thursday.

The opening event took place at Busan Cinema Center instead of the planned BIFF Village in Haeundae Beach, which was completely destroyed by Typhoon Chaba after it hit the southern part of the nation, including Busan, on Wednesday.

The 10-day festival began at 6:00 p.m. with an eye-catching red carpet event, attended by popular stars, including actresses Han Hyo-joo and Park So-dam and singer-turned-actor Minho from boy group SHINee.

Next came the award ceremony, where late Iranian director Abbas Kiarostami was named “The Asian Filmmaker of the Year” and Laurence Herszberg from the film institute, Forum des Images, was celebrated as the recipient of “Korean Cinema Award,” which is presented to cineastes who have made a notable contribution in the globalization of Korean cinema. 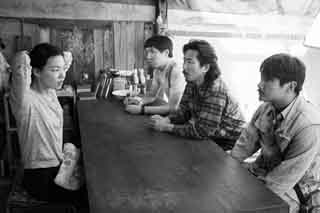 This year’s BIFF will screen 301 films from 69 nations, 96 of which will be world premieres. The screening officially began with Korean-Chinese director Lu Zhang’s black-and-white movie “A Quiet Dream,” which centers on the life of a young bar owner Ye-ri (Han Ye-ri), who three men try to woo without much success.

As challenging as it was to launch this year’s BIFF due to the conflict between its organizing committee and Busan city, after the former pushed ahead with screening the politically charged documentary “The Truth Shall Not Sink with Sewol” in 2014 despite the refusal of Busan city mayor Suh Byung-soo, the 21-year-old film event this year is screening several films that reflect its respect for freedom of expression.

One of them includes Mohsen Makhmalbaf’s “The Nights of Zayandeh-rood,” which was restricted by the Iranian censorship committee in 1990 for being against the country’s spirit of revolution and a threat to national security. Makhmalbaf resurrected the film to be screened at several film festivals this year, including BIFF.

Another Iranian movie that went under censorship is Kamal Tabrizi’s “Reward,” which, eight years after its creation, was only recently approved by the state. The two films are featured in the “A Window on Asian Cinema” section as “Special Screenings.”

Other prominent movies to note in Asia’s largest and most prestigious film festival are award-winning movies from the 2016 Cannes Film Festival. Running under the “World Cinema” section that gives viewers insight to the general trends in the film industries of non-Asian countries, Ken Loach’s “I, Daniel Blake,” Xavier Dolan’s “It’s Only the End of the World,” and Olivier Assayas’s “Personal Shopper,” which are the recipients of Palme d’Or, Grand Prix and Best Director, respectively, will be featured in Busan.

Pedro Almodovar’s fragmentary drama “Julieta” is another noteworthy film under “World Cinema.” Adapted from three Canada-set short stories by Nobel Prize-winner Alice Munro, the film was tipped for competition at this year’s Cannes.

Those who seek experimental movies should note Tobias Nolle’s “Aloys” under the “Flash Forward” section. The psychological drama draws on a middle-aged private investigator whose life turns around after a mysterious woman contacts him after stealing his surveillance video tapes. Another conspicuous flick under the experimental section is Juho Kuosmanen’s “The Happiest Day in the Life of Olli Maki.” With the backdrop set in 1962, the black-and-white drama centers on a twenty-something boxer, who faces problem focusing on his match after falling in love with a woman.

The last movie showing at BIFF this year will be Iraqi filmmaker Hussein Hassan’s “The Dark Wind.” Revolving around a collision of conflicting religious beliefs, traditional values and love, this flick is expected close the film festival on Oct. 15 with a message that show’s BIFF’s strong will to guarantee freedom of expression.

The international event’s visitors will obtain a rare chance to see movie stars from all over the world such as Japanese actor Odagiri Joe, Hong Kong actress Kara Wai and American actor Miles Teller. High-profile Korean stars like actor Lee Byung-hun and actresses Son Ye-jin and Yoon Yeo-jeong will also shine at the event by meeting their fans at presentations at 3 p.m today, at 1 p.m. and 6 p.m. on Saturday, respectively, at the Busan Cinema Center.