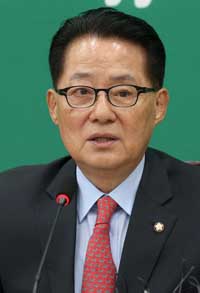 A ruling party lawmaker has whipped up a cyclone of controversy after comparing the acting head of the People’s Party to a North Korean spy.

The furore started earlier this week after Rep. Park Jie-won, acting head of the People’s Party, criticized the president for urging the mass defection of North Korean people in her Armed Forces Day speech on Saturday. Rep. Park, a strong promoter of the Kim Dae-jung administration’s engagement plan, known as the Sunshine Policy, harshly criticized her idea by calling it a “de facto declaration of war” against the North’s young ruler Kim Jong-un.

“Anyone who thinks the president’s message was a declaration of a war has their brain waves tuned to the North Korean authorities,” Saenuri Rep. Kim Jin-tae said Wednesday in a press conference. “Truong Dinh Dzu, who unsuccessfully ran in Vietnam’s 1967 presidential election, and Gunter Guillaume, secretary to West German Chancellor Willy Brandt, were both later revealed as spies.”

Following Kim’s comment, Park posted a reply on his Facebook. “If I was a spy, the government would have arrested me. And you would have turned me in as a spy and won a reward. The government is incompetent and you are a coward.”

Kim responded, “No one called Park a spy, but a thief thinks everybody is speaking of his theft.”

“The ruling and opposition parties have different views toward President Park’s speech, and that illustrates the difference over how they think we should dismantle the North’s nuclear arms programs,” he said. “Just because there is a difference, calling the head of a political party a double agent is seriously wrong.”

Woo also urged Kim to issue an apology to Park and recant his comment.

Some Saenuri lawmakers also showed concern toward Kim’s action, implicitly favoring the idea that the enemy of one’s enemy is a friend.

“The Minjoo Party will likely elect former chairman Moon Jae-in as its presidential candidate, and Park is likely the strongest attacker of Moon,” a Saenuri lawmaker said. “We should be friendly to him. “There is a general consensus within the party,” a Saenuri official said, “that Park is a high-value asset that we can use.”