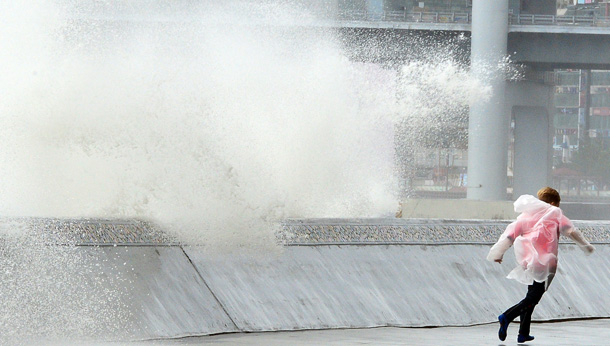 Waves similar to a tsunami caused by Typhoon Chaba slam over a breakwater in the Marine City area in Busan on Wednesday. [NEWSIS]

Residents of a luxury residential complex by the sea in Busan apparently opposed government plans to build a higher breakwater - possibly leading to major property damage inflicted by a deadly typhoon.

They said the sea view was more important than their own safety.

Waves higher than 8 meters (26 feet) slammed through a seawall in front of Marine City, a luxury high-rise residential and commercial complex in Haeundae District, flooding the streets some 200 meters from the shore, lifting cars and shooting through windows of buildings.

According to the Busan city government, 453 cases of property damage have been reported to the fire department and district offices in the city as of Thursday. Among them, 95 concern flooding.

Investigations revealed that residents thwarted local government plans four years ago to build a higher barrier above the breakwater for fears it would ruin their views and bring down property values in the complex.

After experiencing repeated floods during typhoons in 2003, 2010 and 2012, the Haeundae District Office in 2012 tried to build a 3.4-meter barrier above the existing 5.1-meter breakwater.

“Some residents present at the meeting with the Haeundae District Office opposed building a 3.4-meter barrier above the breakwater,” said a 61-year-old resident of Marine City, who said she attended the meeting four years ago. “Some residents even cited examples from abroad in arguing that the view of the sea should not be ruined by a breakwater.”

“Some residents opposed building any waterproof barrier above the 5.1-meter breakwater at all,” said an official of the Haeundae District Office. “Others asked for a 0.5-meter to 0.8-meter barrier instead of a 3.4-meter one.”

In the end, Haeundae District and residents settled for a 1.2-meter high waterproof barrier above the 5.1-meter high breakwater in 2012.

Others in the city are now paying for that decision. “I have never seen such a mess since I moved here from Seoul three years ago,” said a 34-year-old resident surnamed Jung. “The water was everywhere and it flooded up to my knees.”

“I don’t know if I want to be living in Busan any longer, what with the recent earthquakes and all,” she added.

In a restaurant some 20 meters from the breakwater in Haeundae, some 10 employees were cleaning up. The floor was littered with glass shards and debris brought in by the sea the day before. Windows to the restaurant remained broken.

“It’s been a month since we opened up,” said an employee. “We all ran out of the restaurant as waves as high as a two-story building came at us.”

Experts are calling for swift measures to guard against typhoons and natural disasters in the area.

“Protection against natural disasters like earthquakes, typhoons and tsunamis are equivalent in importance to the security of the nation,” said Shin Hyun-seok, professor of social environment at Pusan National University. “The local government’s statement that it couldn’t build a higher barrier because of residents’ opposition is a petty excuse.”

“Experts have pointed out time and again that Marine City is too close to the sea, and can be in real danger in times of a tsunami,” Shin said. “Yet authorities placed more importance on the economic factor of a good view, resulting in what is now increasingly perceived as a man-made disaster on Wednesday.”

Busan’s city government is planning on investing some 65.5 billion won in a 650-meter long breakwater near Marine City, and also in extending the waterfront area at the shore by 2020. Authorities confirmed on Thursday that at least seven died and three went missing in typhoon Chaba, which slammed across Jeju on Tuesday and into southern cities on Wednesday before dissipating in the East Sea near Japan. The Ministry of Public Safety and Security announced Thursday that it will provide 8 billion won ($7.18 million) as subsidies to Ulsan, Jeju, South Jeolla, Busan and North and South Gyeongsang to help cover repair costs in the aftermath.