‘Overseas Koreans are giving to the world’

‘Overseas Koreans are giving to the world’ 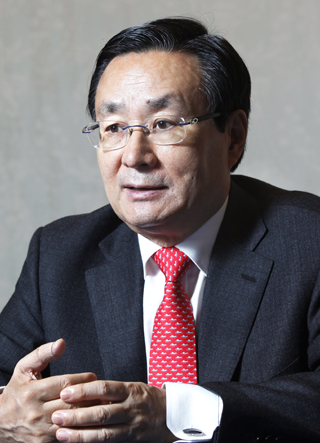 Supporting education in Korean language is a major factor in keeping together the 7.2 million Koreans living abroad, said Ju Chul-ki, who as of July is the new president of the state-run Overseas Koreans Foundation.

“The history of the emigration of our people dates back 150 years, but in that short period of time we have reached 7.2 million Koreans across the world,” Ju said in an interview with the Korea JoongAng Daily Wednesday on the sidelines of the World Korean Community Leaders Convention at Lotte Hotel World in Jamsil, southeastern Seoul. “Our diaspora has spread to every corner of the world, which is why 10 years ago we decided upon Korean Day.”

Some 400 Korean community leaders from over 80 countries gathered for the convention, which also coincided with a ceremony to mark the 10th Korean Day.

Korean Day was first promulgated by the government in 2007 to recognize the importance of overseas Koreans in society and help bring them together.

President Park gave an address at the ceremony, promoting opportunities for Korean youths to find jobs overseas while delivering a message of peace and unification on the Korean Peninsula. The convention, which kicked off Tuesday, first launched in 2000 to build a network for leaders of Korean communities overseas.

The Overseas Koreans Foundation, under the Ministry of Foreign Affairs, hosted cultural activities, including exhibitions and the 15th World Korean Business Convention, last month. It will also hold the Future Leaders Conference with the theme of “Lights of Korean, Light the World!” between Oct. 17 and 21.

This year also marks the 70th anniversary of the founding of the Federation of Korean Residents in Japan.

“There is high youth unemployment,” said Ju, “so instead of just looking into Korean society we want them to look out to the global market and take on challenges and get employed.”

Ju, a career diplomat, previously served as a senior secretary for foreign affairs and security to President Park Geun-hye and deputy chief of the National Security Office.

Through the business convention, he added that overseas companies agreed to train and employ Korean youths. So far, 600 applied, of which 110 will be selected and “if this goes well, there will be opportunity to expand this program,” he added.

The 60-strong foundation is scheduled to relocate its headquarters to Jeju Island next July, and Ju, accompanied by his wife, will helm the move, while maintaining a branch in Seoul that will make up around a fifth of his office.

“North Korea’s threat is gravely serious; we cannot leave things this way,” Ju said, adding it is optimal to bring Pyongyang back to dialogue and continue to work with other members of the six-party talks - Washington, Tokyo, Moscow and Beijing - in accordance to the Northeast Asia Peace and Cooperation Initiative.

He pointed out, “Koreans live in all the major neighboring countries, which creates an advantageous environment for unification, and I see that the overseas Korean community has a definite role in the peace and unification of the peninsula.”

Q. What is the most important focus of the foundation?

A.The foundation puts the greatest emphasis on preserving our mother tongue and enabling the next generation to learn the Korean language. Hangul, invented by our King Sejong, is becoming central to linking the Korean overseas community. And preserving our language well, and through that teaching our history and culture, is the most pivotal element to building our identity, so we are working on various ways to support 1,900 Korean schools across the world.

We also have some 600 Korean societies and associations globally that we are supporting, and are also aiding the next generation to become good leaders. The Korean community has become very influential, so while they contribute to the development of the respective countries that they reside in, they also help develop that countries’ relationship with Korea and are developing into a community that can contribute to the global society.

Is a return to dialogue with North Korea possible right now?

What can we except from the new UN Security Council resolution on North Korea for its fifth nuclear test?

If the UNSC resolution is 100 percent implemented, the regime cannot continue to exist - it cannot earn money, trade or have any sort of exchange. … While they say that so long as the people in Pyongyang are okay, things will be fine, I am aware that Pyongyang is also undergoing difficult times right now. That is why, while there still is a chance, North Korea needs to take the hand of the international community and return to dialogue.

What is your ultimate vision for the foundation?

Korea is a country contributing to the entire world. So we want to help our Korean communities overseas to become global citizens. Also, our country has achieved economic growth, political democratization and cultural influence, but we have not yet achieved unification. After 60 years of division, we need to put more effort into the peace and unification of the Korean Peninsula and put into use the influence of our overseas Korean community.