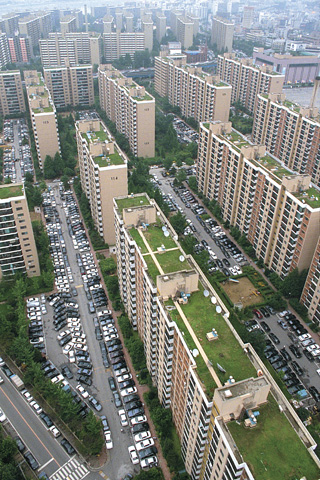 Apartments in Apgujeong, southern Seoul, where residents await the finalization of a redevelopment plan. [JOONGANG ILBO]

The Seoul Metropolitan Government unveiled Thursday its long-awaited redevelopment plan for Apgujeong in southern Seoul, but the Gangnam District Office opposed the proposal, deeming it “one-sided.”

The intention is to redevelop the area as a whole and to improve not only apartments, but the overall residential environment, traffic conditions and commercial districts, according to the Seoul city government’s proposal.

To push through the plans, the government will open a public session on Thursday to receive residents’ opinions before requesting reviews of the plan from other public offices.

According to plan, the total area will be divided into nine sections for development, of which six will be allocated to the 24 apartment complexes.

The city government has imposed different height restrictions for the two types of districts. The six sections for apartment complexes can build structures up to 35 stories in height, in accordance with the government’s regulations on the level of apartments that stand along the Han River, while the three special sections will be allowed to reach a height of 40 stories.

Restrictions were eased on the latter to help boost Apgujeong-dong’s commercial traffic and make use of its location as the city’s traffic center.

“The decision to differentiate commercial and residential areas was made to encourage innovative city development instead of constructing similar buildings,” said a spokesman for the Seoul Metropolitan Government.

The city plans to conduct an evaluation in advance to figure out how its proposal will influence traffic. This way, it can better plan the construction of new roads or change the width of existing roads before the redevelopment is finished.

But the city government’s proposal is facing opposition from the Gangnam District Office, which already paid for part of the project. In a press release published on the same day, the district office criticized the proposal as lacking prior discussion by both sides.

One concern was that the redevelopment plan is expanding to include commercial districts, which would consequently prolong the process by one to two years. Such a delay is problematic because residents of Apgujeong-dong have been waiting for the project for some time and there is already a history of failed negotiations going back a decade.

Measuring 1.15 million square meters (0.44 square miles) in size, Apgujeong-dong’s residential complex has 24 apartment buildings and holds over 10,000 homes. The neighborhood was Seoul’s most expensive residential area since its development in the 1970s, but after 20 years, its apartments have become old and the luxury crown was handed down to Banpo-dong, which started redevelopment much earlier.

Another problem was the city government’s decision to restrict apartment heights to 35 stories. The kind of apartments that Apgujeong residents have longed for reach up to 50 stories, and this has been a major issue preventing Apgujeong residents and the city from reaching an agreement in previous negotiations.