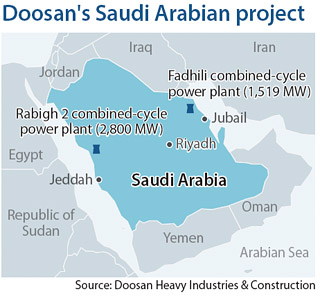 The construction arm of Doosan Group will build a power plant in Fadhili, about 50 miles inland from the eastern port city of Jubail, to provide heat and electricity to the Fadhili gas complex. The project, initiated by the state-run Saudi Electricity Company and Saudi Aramco, is scheduled for completion by November 2019.

To participate in the bid, Doosan Heavy had to form a consortium with French energy company Engie. The Export-Import Bank of Korea gave Doosan financial support as part of its initiative to help Korean companies win orders from foreign contractors.

Doosan will be responsible for engineering, procurement and construction, and designing the layout and test-operate the plants. Engie will coordinate project details with Saudi Arabian electricity companies and help finance the project.

“This contract comes at an important time when orders from the Middle East are decreasing because of low oil prices,” said Kim Hun-tak, CEO of Doosan Heavy’s engineering, procurement and construction business. “The competition was fierce with local [Saudi] consortia and global rivals bidding for the project.”

In April, Doosan Heavy completed a thermoelectric power plant in Rabigh, a town north of the coastal city of Jeddah, which can generate 2,800 megawatts. It currently produces the largest amount of electricity in the world from a single power plant.

In comparison, the power capacity of the new Fadhili plant will be 1,519 megawatts.

“This contract allows us to gain an upper hand in Saudi Arabia, which has continuous plans to establish more combined-cycle power plants generating an accumulated power amount of up to 40,000 megawatts by 2024,” Kim said.

“Since the recent earthquakes in Gyeongju have delayed new construction of nuclear plants in Korea, which Doosan was taking part in, this contract will be especially positive for the company,” said Jung Dong-ik, an analyst at Hyundai Research.