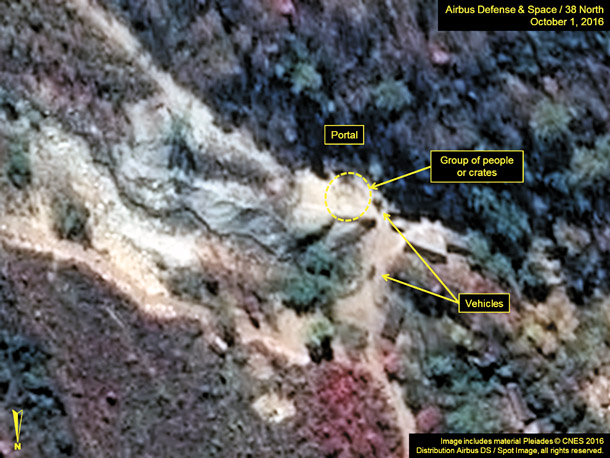 Signs of increased activity at North Korea’s Punggye-ri Nuclear Test Site could indicate it is preparing a sixth nuclear test, according to recent satellite imagery.

The South Korean government and military have warned that Pyongyang may conduct another nuclear test or ballistic missile launch to coincide with its ruling Workers’ Party’s founding anniversary on Oct. 10. South Korea is maintaining a state of emergency preparedness. Another possible timing for an additional provocation from Pyongyang, according to observers, could be the U.S. presidential election scheduled for Nov. 8.

Satellite images of the Punggye-ri site in North Hamgyong Province from Oct. 1 indicated continuing activity at all three tunnel complexes that could be used to conduct another nuclear test, according to 38 North, a website run by the U.S.-Korea Institute at Johns Hopkins University’s School of Advanced International Studies Thursday.

Imagery showed a large vehicle, possibly a truck, near the entrance of the North Portal, where the Sept. 9 nuclear test occurred, along with boxes or other materials around the side of the main building. This could be for collecting data following the fifth test, sealing the portal or preparing for another detonation, according to the analysis.

A large canopy in the parking lot at the North Portal that has been there for the past two months remains in place.

There was also increased activity near one of the two entrances at the South Portal, where excavation stopped in 2012, according to the satellite imagery. Two small vehicles were on the road as well as possibly a group of people standing near one of the portal entrances, which can indicate ongoing work or maintenance.

While President Park is carrying out her regular duties, she is frequently being updated on North Korea.

North Korea’s first four nuclear tests were three years apart from each other: the first in 2006, the second in 2009, the third in 2013 and the fourth last January. Pyongyang broke the cycle with the fifth test, its strongest to date, on Sept. 9, the 68th anniversary of North Korea’s founding as a state. It was the second test this year.

“It doesn’t seem like North Korea will just pass this by,” another government official who requested anonymity told the JoongAng Ilbo Friday. “Regardless of the international community discussing additional sanctions, a take-me-down-if-you-can sort of provocation is expected.”

“We are not only using the South Korean Army’s reconnaissance assets but sharing intelligence between Seoul and Washington on related trends,” a military official told reporters. This includes deploying the U.S. Air Force’s U-2 high-altitude spy plane and Global Hawk hovering unmanned aerial vehicle.

The official pointed out, “North Korea has not even removed the canopy used to conceal its activities since its fifth nuclear test and has maintained a situation when it can conduct another nuclear test whenever it wants to. Right before a nuclear test, movement of people and vehicles disappear for safety concerns.”

South Korean Foreign Minister Yun Byung-se called for a “holistic approach” to resolve the North Korean nuclear conundrum as he addressed the top decision-making body of NATO, or the North Atlantic Treaty Organization, in Brussels Thursday.

He said the nuclear problem is “inseparable from a host of North Korea-related issues, such as human rights violations, overseas slave labor and the information black-out inside North Korea.”

Pyongyang has reacted especially sensitively to international condemnation of its human rights abuses, which have been raised by the UN Human Rights Council, General Assembly and the Security Council.

He said North Korea is advancing its ICBM, or intercontinental ballistic missile, and SLBM capabilities “at an alarming pace.”

Quoting U.S. Gen. Joseph Dunford, chairman of the Joint Chiefs of Staff, Yun pointed out that Pyongyang is becoming a “direct threat even to the continental United States.”

Yun pointed out that North Korea has fired 22 ballistic missiles this year, and along with plutonium reprocessing, making at least 25 violations of UN Security Council resolutions. He emphasized that any loopholes in UN Security Council Resolution 2270, implemented in March, need to be closed.

He asked the council to imagine young North Korean leader Kim Jong-un’s “fingers on the nuclear button” and emphasized: “This is our last chance.”