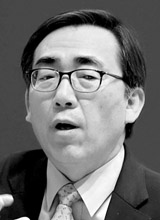 Cho Tae-yul, the 2nd vice foreign minister, was named as the new South Korean ambassador to the United Nations in New York by the Ministry of Foreign Affairs on Friday.

He replaces top envoy to the U.N. Oh Joon, who took the post in September 2013.

Cho, a 61-year-old career diplomat, joined the Foreign Ministry in 1979 and served as vice foreign minister since March 2013.

His appointment comes at a vital time when the U.N. Security Council is drafting a resolution calling upon additional sanctions on North Korea for its fifth nuclear test last month.

Cho is a graduate of Seoul National University’s College of Law and pursued further studies at Oxford University.

He has previously served as deputy minister for trade, ambassador to Spain and ambassador to the Korean Permanent Mission to the U.N. Office in Geneva.

Cho is also expected to meet on Saturday with U.S. Ambassador to the U.N. Samantha Powers, who has been a close partner to Seoul in the United Nations.

Powers is on a six-day trip to Japan and Korea, which runs to Tuesday, to consult with officials on how to respond effectively to the regional threats to security and stability posed by North Korea’s nuclear and missile programs and meet with North Korean defectors, according to the U.S. Embassy in Seoul.

He is expected to assume his post in New York later this month or early next month.

The Foreign Ministry has not yet named who will replace Cho as the 2nd vice foreign minister.