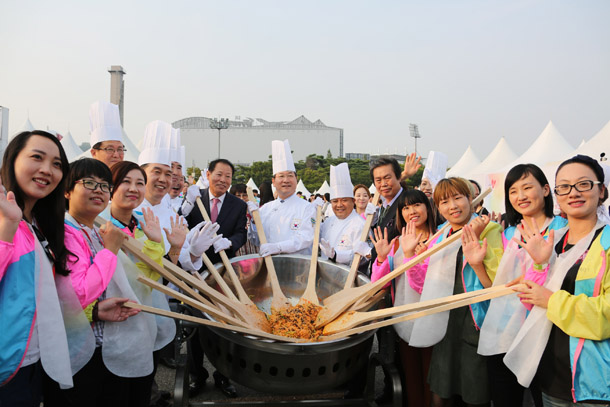 Employees of Palevon Cosmetics Company make bibimbap (a dish made of rice mixed with vegetables) at a food culture festival in Incheon on Sept. 24. The city of Incheon has recently emerged as a popular destination for Chinese tour groups. [INCHEON TOURIST ORGANIZATION]

As part of a traditional Korean culture tour involving thousands of Chinese tourists, 20 buses stopped on Sept. 27 in front of Wolmi Traditional Park in Incheon’s Wolmido.

Approximately 3,000 Chinese employees of Palevon Cosmetics Company, a cosmetics and health supplements company based in Guangzhou, visited the third-largest city in Korea.

“I’m very excited to try on hanbok,” exclaimed Zhang Lili, a 30-year old visitor from northern China, “which I only saw in Korean dramas.”

The city of Incheon has recently emerged as a destination for Chinese tourist groups.

The Guangzhou-based cosmetics company Aurance hosted its annual employee convention there in March, marking the largest tour group to ever land at Incheon International Airport when about 5,400 workers flew in. A total of six similar-sized groups have followed suit since then.

Some 3,000 employees of Palevon Cosmetics Company flew in from Sept. 23 to 24 and a total of 41 planes and 66 tourist buses were used to take them around.

The group visited Incheon Munhak Stadium on Sept. 24 to attend a concert performed by SHINee and 14 other idol groups. After the show, the group gathered at a food culture festival near the stadium.

“It’s too bad that Big Bang didn’t perform tonight,” said Wu Yanhong, a tourist from Beijing, “but I was excited to see Korean stars with my own eyes and try Korean food.”

The employees spent three days of their six-day tour in Incheon and made it back to China on Sept. 28. A total of 12,600 Chinese nationals, who belong to two different Chinese groups, are also expected to visit Incheon from October to November.

With the largest number of tourists visiting in Incheon’s history, tours from China have now become a model for how to attract more tourist dollars. So why do Chinese companies choose Incheon?

“The city is close to the airport,” said Guo Chenglin, CEO of Aurance Group, “so accessibility was one thing.” The 54,000-square-meter (581,250-square-feet) convention center Songdo Convensia, where Aurance Group held their meeting, is 20 minutes from Incheon International Airport and the Port of Incheon by car.

Zhang Jingyao, head of Palevon Cosmetics Company, named “facility” as a main reason for choosing Incheon. Songdo Convensia is an ideal facility for large-scale group meetings as it has exhibition and ball rooms in two different halls along with 23 small and medium-sized conference rooms. Songdo Convensia also caters to individual groups by decorating meeting rooms with group information and hoists a Chinese flag and a welcoming sign for groups outside its building.

There are more facilities like Songdo Convensia in Incheon, such as banquet halls at hotels and parks, which can accommodate a large number of people.

The city government, in addition, designs specific tour programs that take in account tourists’ gender and age. The city government suggested one of the locations used in “My Love from the Star” for Aurance, whose employees were mostly women in their 20s and 30s.

A taste of Korea’s most popular snack combination, chimaek, or chicken and maekju (beer), was another successful tour program the city government came up with. Palevon Cosmetics Company’s tour program focused on cultural experience and shopping, as 80 percent of its employees were women in their 20s to 40s.

“We’ve held meeting tours all over the world,” Zhang, head of Palevon Cosmetics Company, said, “but Incheon was the first place we felt genuinely welcomed.” He continued, “We hope to come back for another tour.”

Incheon Tourism Organization carried out a survey on Chinese tourists’ satisfaction, which showed that tourist attractions scored 4.35 and Songdo Convensia 4.43 out of 5, while 94 percent of respondents said they would like to revisit Incheon or would recommend Incheon as a tourist destination.

Two of the groups that visited Incheon, Aurance and Longliqi, already singed their MOUs to send 30,000 employees to Incheon over the next three years. Baek Hyun, chief of the MICE industry in Incheon, said, “Incheon will attract more meeting tours after the expanded construction of Songdo Convensia in 2018.”