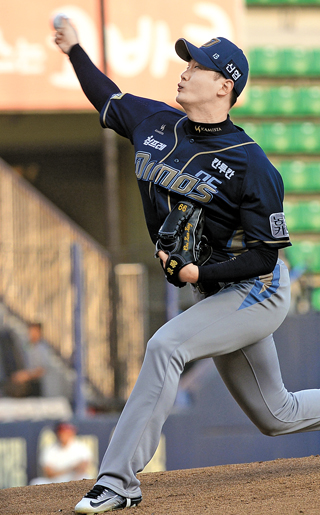 Choi Keum-kang, a reliever-turned-starter for the NC Dinos, has risen from undrafted player to one of the leading pitchers of the KBO. [NEWSIS]

The NC Dinos have finished this year’s regular season in the Korea Baseball Organization (KBO) as second in the league. Their first game in the postseason will be on Oct. 21 hosting their opponents at their home park, the Masan Baseball Stadium. While many stars shined this year for the Dinos, who are making it into the playoffs for the third straight year in their four years of existence, Choi Keum-kang, a reliever-turned-starting pitcher, certainly stands out as an underdog.

“I thought about joining the military and making a career out of it,” Choi recollected. “It was my high school coach who told me to stay on a little longer. Had it not been for the Dinos giving me another shot, I would’ve quit baseball.”

Indeed, Choi was never a cut above the rest. In fact, he went undrafted in the KBO twice, which would be enough to dampen anyone’s spirit, but after going undrafted for the second time since graduating from Inha University, it was the Dinos that threw him a lifeline.

Choi joined the newly-established Dinos as part of the team’s player development program. He never stood out, as players in the program often leave the team without making a professional debut, but Choi finally did have his top-league debut in 2013.

The first two years were a nightmare for Choi, who recorded a mere four holds with two losses over the course of 34 games. His earned run average (ERA) for the 2014 season stood at 9.00, forcing Choi to re-consider leaving the league for good and pursuing a military career.

But the 27-year-old righty turned out to be a late bloomer. As a member of the team’s bullpen last year, Choi pitched in 78 games while ending the season with a 3.71 ERA, six wins, 14 holds, one save and five losses, a giant leap forward compared to his previous two seasons.

After securing his position in the Dinos’ starting roster, Choi took over a different assignment in the middle of the season this year. Instead of playing relief, Choi would be the starter for the Dinos.

Throughout the season, he tossed in 51 games, or 107 innings, the most innings pitched in a single season, finishing off the regular season with 11 wins, two saves and four holds, while losing four.

When asked about what it meant for him to tally more than 10 wins, Choi answered, “What’s important for me, more than the number of wins, is that I push myself to maintain this pace.”

After turning starter in August, Choi tossed in 11 games, keeping the mound for more than five innings in eight of them. “I didn’t think about pitching more than a certain number of innings,” Choi said. “I kept my focus in each game and in every throw.”

Kim Kyung-moon, the manager of the Dinos, was one of the first to notice certain changes in Choi. Like Son Min-han, the Dinos’ veteran pitcher, who is known for the versatility of his plays, Choi learned how to toss different styles of pitches depending on the batter. “I am not a power pitcher,” Choi explained. “But I try to challenge the batters by throwing them off their timing when they swing. Also, fielders help me out a lot. It’s not just me that keeps my numbers solid.”

Although he started to play in fewer games after taking up the starting assignment, the number of innings in which he found himself on the mound rapidly increased. But Choi said this suits him better than before. “With more days off, I can work on my conditioning to stay fitter.”

Looking back, Choi says he has paid his dues and it was all worth it. “I’m just grateful that the manager trusts me and uses me,” Choi said. “I’m thankful for being able to play in games. I never thought I’d see any light just two to three years ago. Whether it’s a starting assignment or relief assignment, just being on the mound makes me happy.”

He added, “I never thought about being where I am today, certainly not after college when I went undrafted once more. If it wasn’t for the Dinos, I’d have left the sport for good. When I first joined the player development program, I thought I’d gain an opportunity if I worked hard.”

Now with the postseason just around the corner, Choi said whether he plays or watches the game from the dugout, he will do whatever job is given to him.