Working only with people you like is the best revenge: Yoon Yeo-jeong : 69-year old vet earns kudos for role of aged prostitute in ‘The Bacchus Lady’

Working only with people you like is the best revenge: Yoon Yeo-jeong : 69-year old vet earns kudos for role of aged prostitute in ‘The Bacchus Lady’ 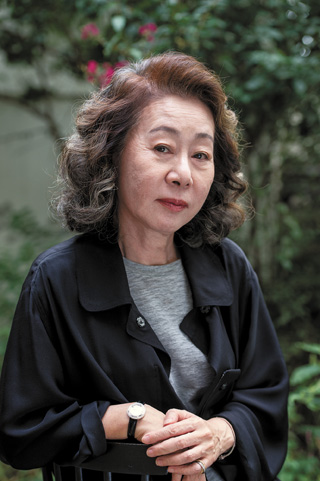 Girls full of character and self-confidence are said to cause “girl crushes” in youngsters these days. Yoon Yeo-jeong, a 69-year-old veteran actress, is the pioneer of the girl crush. With her distinctive tone and slim looks, Yoon has been loved by Korean audiences for decades.

Marking her 50th year in acting, Yoon recently made a grand comeback as the main character in the film “The Bacchus Lady,” directed by E J-Yong. The film allowed her to nab the best actress award at the 20th Fantasia International Film Festival, which was held in July and August.

In the film, Yoon plays So-yeong, a veteran prostitute earning a living by providing her services to old men. She is famed among her customers for the quality of her services. Just as the film seems to be centered on the problem of prostitution and aging, its angle widens to also deal with other serious issues, such as those affecting biracial and transgender Koreans, as well as death and euthanasia.

The JoongAng Ilbo sat down with Yoon to take a deeper look into how she viewed her role in the film. Below are excerpts from the interview.

Q. Many praise you for “The Bacchus Lady.” Do you agree that no other actress could have done it better?

A. Many directors or writers say that when they cast actors. I believed them most of the times when I was young, but I don’t think I’m young enough to be so conceited anymore. If time and other situations allow me to take the part, it’s my character. But if not, it becomes another actor’s. That’s the fate of actors. In the end, it’s not like I’m the only aged actress.

It seems like your character in the film, So-yeong, could be morally blamed, but is at the same time easy to sympathize with. What do you think of the character?

That is exactly why I agreed to take the part. I thought Director E J-yong would develop the scenario into a heartwarming story rather than a radical one. When So-yeong fell into a life of prostitution after giving her child up for adoption, she would have thought of herself as dead. And that’s why she was able to kill other people too, since her life has been so dreadful and full of pain.


So-yeong always lights a candle and puts a soju bottle by it before she starts with her services. It almost seemed like a tradition, in that she seemed especially careful when doing it. What exactly was it?

When Director E told me to do it, I asked him what it meant. E answered it was So-yeong’s own little tradition. But I think that’s too broad an explanation. Here’s what I think. In the end, prostitution cannot be easy, even for So-yeong, who has done it many times, and is even good at it. It would have been difficult for her to readily say, “Alright, let’s begin,” to someone she’d met for the first time. I think it was her own way of getting used to the atmosphere by earning some time. 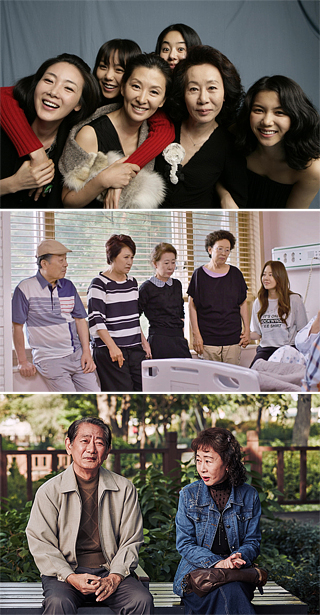 This isn’t your first time working with Director E J-yong, having taken part in “Actresses” (2009) and “Behind the Camera” (2013). Were there any difficulties despite your past experiences working together?

I would say that there were some scenes difficult to act, keeping in mind the characteristics of So-yeong’s job. But Director E would tell me to do the same scenes three to four times. It was especially hard for an aged actress, both physically and mentally. I personally have a weak stomach, so it was not easy for me to bear the typical smell of motel rooms. Sometimes I felt so sick that I couldn’t eat anything, so I got through by filling my stomach with a mouthful of cup noodles and a sip of wine. Then a thought struck me. If this is so difficult to act out, how hard would it be for those who do this for a living? What could possibly have happened to them to end up there? As we all know, life is indeed unfair.

Maybe those feelings you got are condensed in the line in the film, “You never know what others have gone through.”

A. You’re right. We often thoughtlessly tell others, “You should think about doing something else,” but who are we to say that? One never knows others’ circumstances. Frankly, I do that too sometimes. But I think I’ll try to make an effort to understand other people from now on. [While shooting the film,] many thoughts occurred to me: Where do these problems stem from? Is it because we live for too long? It’s no longer the time to think about how to live well, but how to die well. I think this film captured that point very well.

You also appeared in the drama “Dear My Friends”(2016), which talks about old people and death. It was remarkable in that the public was turning a new eye to the issue of aging. What do you think of that?

My mother turned 93 this year, and hated the drama. For young people, they still have decades left until they grow old. It may be interesting for them to watch stories about old people, but for the old, it’s not such a joyful subject. Of course, as an actress, I feel happy to take part in a piece with the theme. But on the other hand, I do admit that I’m still standing on the viewers’ side, since I’m still young enough to continue on with my career. I’m not sure how I would think about the issue when I grow old.

You also successfully acted a materialistic woman in the film “The Taste of Money” (2012) and a silly old lady in “Canola” (2016). What is the secret to portraying such diverse characters?

When I took part in Director Kim Ki-young’s film “Woman of Fire” (1971), one of the contract conditions was to watch one movie per day for two months. Director Kim told me, “You must become an actor like Alec Guinness.” At the time, I sniffed at his words thinking, “Why would he tell me to be an actor like Alec Guinness, when there are so many other cool actors like Alain Delon?” But now that I think of it, it was childish of me to think that way. After I got into my forties, I watched “A Passage to India” (1984), expecting Alec Guinness to show up in the film. I continued watching for quite a bit of time, but Guinness didn’t appear. It turned out that I couldn’t recognize him dressed up as an Indian. It was only then that I realized what Director Kim had meant.

What kind of people do you like to work with?

I like people who put their best effort into their work. The reason I decided to take part in the American drama series “Sense 8” (2015-) is because the Korean casting director worked so hard to cast me. At first, I declined, saying “Aren’t you going to ask me to take part as ‘Prisoner A’ or something?” But the director told me, “I really want to show the world that Korea has great actors like you.” There’s one determination I made when I turned 60: I would only work with people I want to work with. I still haven’t changed my mind on that thought. But you never know, I might rush in to work with other hardworking actors again in the future.