Life in the urban center of the Joseon Dynasty: New exhibit examines relationship between cities and the arts

Life in the urban center of the Joseon Dynasty: New exhibit examines relationship between cities and the arts

“Literati Gathering of the Middle People” (1853) by Yu Suk (1827-73). “The City in Art, Art in the City” exhibition sheds light on the tastes, hobbies and lifestyles of the urbanites, particularly, the new power group of the 19th century, the middle class. [NATIONAL MUSEUM OF KOREA]

All throughout human history, and no matter where in the globe, cities - all its glamor and grime, lights and darkness - have been filled with artwork, if not artworks in their own right. They’ve inspired artists and writers.

In that sense, the relationship between the cities and the arts is so profound, so close.

An exhibition that kicked off last week at the National Museum of Korea in Yongsan District, central Seoul delves into that very relationship.

Through 373 pieces of rare, amazing artifacts, the exhibition examines the city life in Hanyang (the old name of Seoul) from the 18th century to the 1930s. The 18th century is often considered the renaissance of Korea’s Joseon Dynasty (1392-1910) with great developments in art, science and commerce and people living in relative prosperity and peace.

In fact, a reflection on the 18th century Joseon is where the idea for this exhibition began in the first place.

“We wanted to shed new light on the essence of Korean art based on recent academic research that rediscovered and reinterpreted the 18th century culture from a different perspective,” Chang Jin-a, a curator of the museum’s Fine Arts Division said.

“As the academic research focused on the urban culture that developed during the late Joseon period, the exhibition naturally came to focus on the relationship between ‘the city’ and ‘art.’ Within this framework, we wanted to analyze art styles and artworks within the city of Hanyang,” she said.

The first section is about the changes in the cityscape as Hanyang became a more vibrant commercial city. The city drew people in, and the population also rose sharply. Shops and houses crowded the city. Poets sang about the cities and artists painted them.

The most impressive artifacts in this section are two long horizontal paintings from China. Titled “Along the River During the Qingming Festival” and “Prosperous Suzhou,” they each measure 10 meters (32.8 feet) and are state treasures of China. It’s very rare to see the two paintings together, officials note.

“As you can see here, an ideal city people dreamed of in that period had commercial and leisure activities, and rare and foreign customs like a circus,” Chang said. 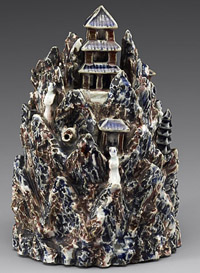 The second part zooms in closer and looks at the people of the city. Here, the highlights are the folk paintings of the famous Kim Hong-do (1745-1806) and Sin Yun-bok (born 1758).

Kim, officials say, captured the commercial and leisure activities of urban people like his famous painting of wrestlers. Sin took it a step further to portray scenes of adult entertainment. In that sense, the second section is not about the ideal city but it gets real.

It’s also rare to see the “Genre Painting Album” of Danwon, the pen name for Kim, and “Album of Genre Painting by Sin Yun-bok” together. Both are the country’s treasures and the latter is part of the collection of Kansong Art Museum, which is rarely displayed outside of the museum.

This part of the exhibit also sheds light on the tastes, hobbies and lifestyles of the urbanites, particularly the new powerful class known as jungin.

The group refers to middle-class people positioned in between the ruling elite of scholar-officials and the commoners. Jungin, officials say, tried to emulate the values, tastes, and lifestyles of the nobility. But as years went by they became artists in their own right and developed their own styles.

Their styles are marked by being expressively vivid. In the past, Korean aristocrats valued being subtle and reserved. The classic case is the large painting of red and white plum trees. Jungin drew them on a large folding screen, so expressively whereas before noblemen drew white plum trees to admire the dignity of the plant.

“The city is where art is born and nurtured,” Chang said. “Unfortunately, few pieces of artwork describing this relationship between art and the city remain. The National Museum of Korea hopes that this special exhibition based on humanistic insights and creative imagination, helps address this scarcity.”


*“The City in Art, Art in the City” runs until Nov. 23 at the special exhibition gallery of the National Museum of Korea. Admission is 5,000 won ($4.53) for adults. Opening hours are 9 a.m. to 6 p.m. on weekdays. The hours are extended until 9 p.m. on Wednesdays and Saturdays to encourage nighttime visits.