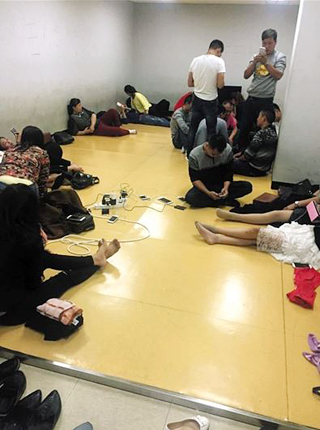 According to the Beijing News and other local Chinese newspapers on Sunday, over 100 Chinese tourists were refused entrance to Jeju Island by Korean immigration authorities over China’s week-long national holiday last week, and the tourists were reportedly detained at the Jeju International Airport for hours, some even days, before returning to China.

“A number of tourists were refused entry for various reasons, and detained [at the airport],” the Beijing News reported on Sunday. “The room contained simple facilities, like electric outlets, and had no bed or blankets.”

The Chinese paper reported that a Chinese citizen surnamed Zhang and his wife were detained at the airport because they could not provide papers for their accommodation reservations at the island.

The paper added that over 100 Chinese tourists were detained at Jeju International Airport during the national holidays, staying at most five days.

Chinese visitors without a visa can be refused entry by immigration officials if they cannot provide a valid passport, travel itinerary, or evidence of accommodation reservations.

The Chinese Consulate General in Jeju Island requested the immigration office in Jeju to provide specifics regarding why the Chinese tourists had to be detained at the airport and to fully protect their rights as Chinese citizens, Beijing News reported.

According to the report, the Chinese Consulate General also said that Chinese citizens entering the island need to follow the South Korean law and immigration regulations.

“Just because regulations allow Chinese tourists to visit Jeju Island without a visa does not mean that Chinese citizens can visit without limit,” said an official of the Chinese Consulate General. “The visitors will need to provide a valid passport, itinerary and information regarding their accommodation reservations.”

Meanwhile, a growing number of Koreans are calling for the abolition of the visa-free immigration policy for Chinese tourists on the island. A petition titled “Abolish the free-visa policy on Chinese tourists visiting Jeju Island” surfaced online a day after a Korean woman was stabbed to death by a Chinese tourist in September. It received more than 12,000 signatures in two days.