Toward an Asian century

Toward an Asian century 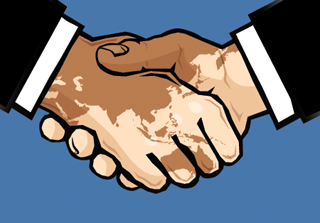 The 21st century has been dubbed “the era of Asia.” After centuries of domination by the West in the wake of the industrial revolution, Asia will finally take center stage.

The continent is the world’s largest piece of land and home to 60 percent of the world’s population. Gross domestic product in terms of purchasing power, which had been less than 20 percent in the 1980s, now hovers at 40 percent. Asia’s contribution to the world economy is likely to grow bigger.

Kishore Mahbubani, a professor at the National University of Singapore, advised Western policymakers and thought leaders to visit industrial complexes in Asia because “there may be a few valuable lessons to be learned” to solve the fallout from overreliance on the markets such as financial crises, economic inequalities and environmental problems. They can learn from the Asian development model, where fast growth and promotion of the middle class were possible through cooperation between markets and governments.

China’s influence in the international community has increased through its staggering growth. It has created a new regional lender, the Asian Infrastructure Investment Bank, and wants to connect China and the West through a new Silk Road under the One Belt, One Road initiative. The Chinese yuan has joined the International Monetary Fund basket of special drawing right to gain global reserve status along with the U.S. dollar, euro, British pound and Japanese yen. Chinese scholars are busy pitching the merits of Chinese capitalism and its unique growth model.

In ancient Assyria, Asia meant “the eastern land of the rising sun.” In the 21st century, the sun has set on the West and risen in Asia. But it is too early for Asians to call the 21st century theirs. The United States and Europe still command enormous economic, political and military power. Economic growth in Asia has slowed, and so-called Asian capitalism has failed to address income inequality, financial instability and worsening environmental problems.

Can Asia claim leadership in the global economy? Endeavors by some Asian countries have been making progress. Japan’s Abenomics — a strong mix of fiscal and monetary policies and reform initiatives led by Prime Minister Shinzo Abe — has made strides in combating low growth and prices. The Chinese government under President Xi Jinping has succeeded in steering the colossal economy toward a soft landing by trying to shift its quantity-based growth to a quality-based model. Indian Prime Minister Narendra Modi has moved on to structural reform after overhauling the tax system while maintaining economic growth at above 7 percent.

Cooperation among Asian economies is as essential as individual expansion in order to make Asia the center of the world. Asian governments are closely dependent, but they do not have a cooperative system. The region can hardly strengthen systematic cooperation because of its weak sense of unity and gap in economic and military power. Conflicts over historical and territorial issues are deep. There is no political mechanism that can iron out differences when sovereignty claims and common regional interests collide.

Asia could win big with economic integration by lowering trade costs among neighboring nations. Economic integration could temper military and political conflicts and help with regional peace. An integrated Asia could have a bigger say over common interests on the international stage. Asian countries must pursue economic cooperation and integration to raise the region’s status on the global stage. Economic integration takes a lot of time. Europe was united through a steel alliance in 1951 and completed the European Union by 1993. Asia, too, can start from areas where it can start cooperating easily.

The regional countries must do away with trade barriers and accelerate cross-investment to expand their common market. They have to strengthen financial and currency services networking to fend off any financial dangers and stabilize the markets. They should share information and cooperate on climate, natural disaster, epidemic and environmental issues. Politicians, businessmen and intellectual leaders in the region must build dialogue channels to draw up a long-term vision for regional development.

There is a lot of room for mediating roles for Korea, as China and Japan cannot entirely take on leadership roles for the cooperation and integration of the Asian economy due to their power struggle for hegemony in the region. But Korea hasn’t been able to do its part because its economy has been sinking and has been grappling with income inequality, an aging population and industrial overcapacity. Korea has also failed to come up with a reliable diplomatic strategy against escalating geopolitical risks from conflicts between the United States and China, and China and Japan. Korea must redesign its economic development model and governance structure so that it does not fall behind in the new Asian age.