Illegal smuggling of drugs, firearms on the rise

Illegal smuggling of drugs, firearms on the rise 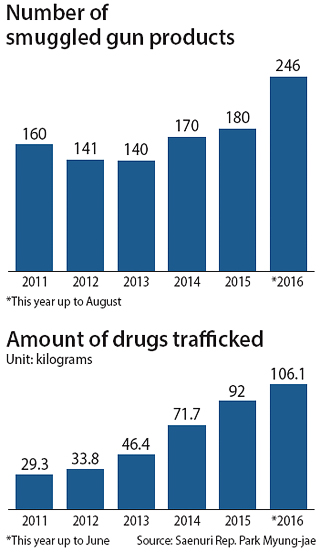 More firearms and drugs are illegally entering the country than ever before, a consequence of Koreans having increased access to the goods online, a lawmaker said Monday.

From the beginning of the year to August, 246 firearms-related products - including conventional guns, stun guns, gas guns and parts - have been smuggled into the country, already 36.6 percent higher than the 180 total trafficked in last year, based on data obtained from the Korea Customs Service by Park Myung-jae, a lawmaker from the ruling Saenuri Party.

In addition to illegal firearms, the government confiscated 92 kilograms (203 pounds) of trafficked drugs last year, a 27.8 percent rise from the previous year.

“In the past, drug and firearms trafficking was a problem limited to a few groups of Koreans such as gang members, but now, more people have access to such items through online and social networking sites,” Park said in a release. “There needs to be stronger measures taken by law enforcement agencies and government branches in charge of the issue to solve the problem.”

From 2011 to 2015, the government confiscated a total of 791 firearms-related products, including 69 guns. The number of products caught at customs each year has continued to grow, and the figure so far for this year has already broken last year’s record.

“The amount of smuggled drugs rose significantly in the previous year due to a rise in the amount of philopon, a methamphetamine, illegally entering the country,” Park said.

The drug traffickers are also becoming more brazen. In the past, most smugglers would transport small amounts at a time, but an increasing number of them are carrying more than 1 kilogram at once into the country.

“It appears that the higher number of smuggled goods is actually leading to more accidents and social problems here in Korea,” Park said.

Most recently, a 50-year-old man surnamed Choi was arrested in Gumi, North Gyeongsang, on Saturday for having sex with a high school student after the two were reportedly under the influence of philopon.