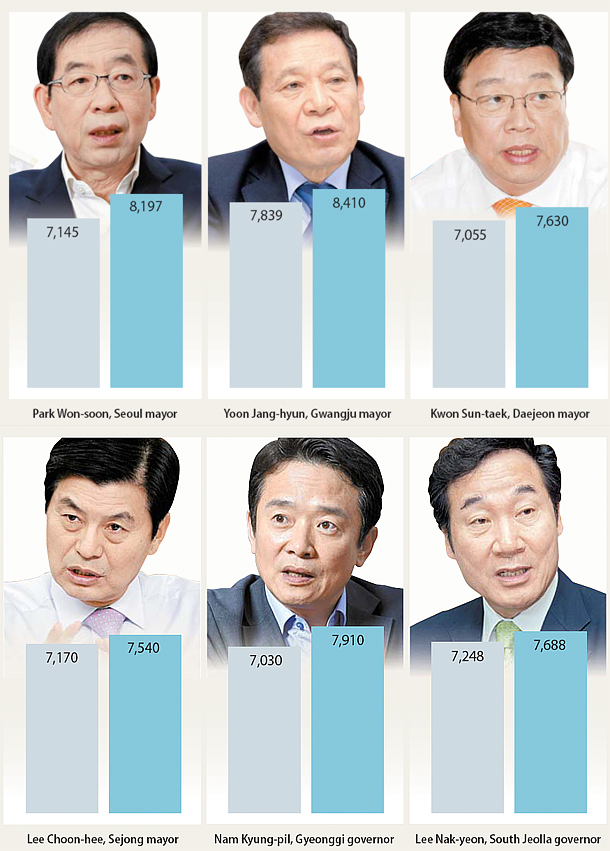 Regional governments are adopting a living wage one after another for their public workers. 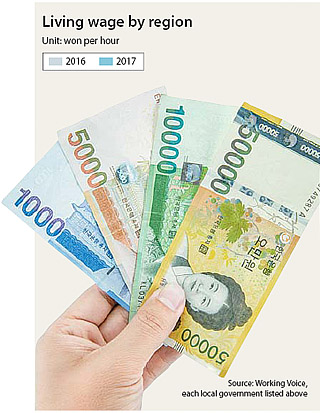 The living wage is defined as the minimum income necessary for workers to meet their basic needs and is calculated by a number of economic figures such as one’s household income and the inflation rate. The concept was first introduced in the United States to address poverty that resulted from the legally mandated minimum wage being unable to cover basic necessities.

In Korea, a living wage was first introduced for government workers in the northern Seoul districts of Nowon and Seongbuk in 2013. Soon after, many regional governments began adopting it for their workers.

Not many Koreans were familiar with the concept when it was first introduced four years ago, as not many Koreans benefitted from it. According to research done by both Korean and foreign institutions, only about 2 to 3 percent of those in the bottom-10th income group received a living wage. In other words, 1,000 to 1,500 people living in a city with a population of 500,000 were able to receive the benefit.

This year, 1,039 people in Seoul and 389 people in Gwangju have enjoyed a living wage.

“There are limitations to the living wage because the local governments have a limited number of people they can hire,” said an official at the Seoul Metropolitan Government.

Sung Jae-min, a researcher at the Korea Labor Institute, argued that the living wage will always have limited impacts on the labor market because it is not run by the central government. “However, I find it meaningful since it is helping the low-income group working in the public sector,” Sung said.

The living wage, in fact, has a very limited beneficiary pool, as only those who work in the public sector can enjoy it. 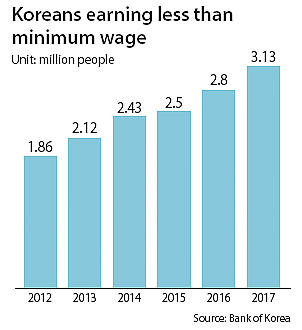 But even though some might feel like they are being left out since they are not eligible for the living wage, it can have some positive sides. “It can pressure the central government to raise the minimum wage,” said Choi Bong, a researcher at the Seoul Institute.

Others, though, are concerned that people receiving a living wage may not necessarily be in low-income groups.

After they started receiving a living wage, the number of people saying they were “satisfied” jumped to 71, or 42.2 percent of the total.

“Many employees are satisfied with a living wage, and we will expand the number of beneficiaries,” said Song Young-hee, a director at the Gwangju city government.

In the study, the average size of households was 2.9, and 51.5 percent of survey respondents said they had a household member with a job. The figure for those with two household members working was 15 percent.

According to the Ministry of Land, Infrastructure and Transport, 55.1 percent of people residing in Gwangju had their own cars, which meant some of the beneficiaries might not necessarily fall under the low-income group.

“No one can come up with social welfare policies if some question why those who are not in the low-income group are receiving living wage benefits,” said Sung Jae-min, a researcher at Korea Labor Institute.

The benefit of the living wage varies by region since the program is run by local governments, which means it is not an official law, leading to inconsistencies. According to Working Voice, a private institution researching labor, some districts in Seoul, for example, had 10 times more people receiving a living wage compared to other districts in the capital that also had a living wage.

A representative from Working Voice added that the living wage can be changed very easily and that it is highly dependent on who is heading the local government.

The data showed that there were a total of 53 local governments that adopted the living wage as of the end of last year, and 47 of them were run by opposition parties.

Seoul has decided to raise the hourly living wage by 14.7 percent from this year to 8,197 won next year. Gyeonggi raised it 12.5 percent to 7,910, and some regions are setting the number at 130 percent higher than the minimum wage.

It is possible that the living wage could bring up the minimum wage in the country if the measure is widely adopted in Korea, but such predictions are just that. There are currently many studies being done on the living wage, such as its impacts on poverty, the labor market and local governments’ finances.

“The living wage is not the only answer to solving poverty problems, but it is one of many possible measures to solve them,” said Sung of the Korea Labor Institute. “The minimum wage needs to be raised in order to solve the income inequality problem, but it is harder for the government to change the law compared to setting up a living wage. And this is why more local governments are adopting the standard.”