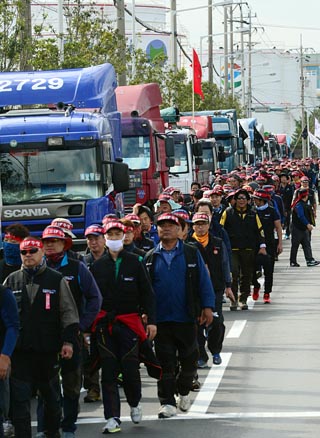 Members of the independent truckers’ union rally to begin their strike on the streets of Gamman Terminal in Busan on Monday. [NEWSIS]

A number of truck drivers have walked out of work starting on Monday to protest the government’s reform plans for the truck transportation market, which were introduced in August.

The decrease of truck transportation is expected to aggravate the logistics disturbance that is already ongoing after the Hanjin Shipping crisis and the strike of the Korean Railway Workers’ Union that started on Sept. 27.

Trucks are mainly used to transport cargo containers on land, which is why industry insiders worry that the strike will negatively impact overall transport logistics in Korea.

One essential point of disagreement is the ease of supply control for small trucks.

Since 2004, the government has controlled the number of small trucks every year based on their cargo volume in order to limit the amount of excessive supplies.

The government’s plan in August proposed the abolition of the system under an initiative designed to solve the transportation shortage.

The union’s concern is that the new plan eases regulations to help small trucks get started in the field, while allowing already registered trucks to carry more so they can meet high demands.

As a result, drivers of large trucks worry this will threaten their jobs.

“The new plan will increase supply and fuel competition in the already heated market,” said a union spokesman, “ultimately leading truck drivers to work in even more difficult and dangerous conditions.”

Other requests include legally fixing the minimum service fare and abolishing the practice of delivery companies buying their own trucks, instead of contracting with independent drivers who first acquired government authorization to operate the trucks.