Finding great hope despite struggle: ‘Art should give people a direction towards a better life,’ says director

Finding great hope despite struggle: ‘Art should give people a direction towards a better life,’ says director 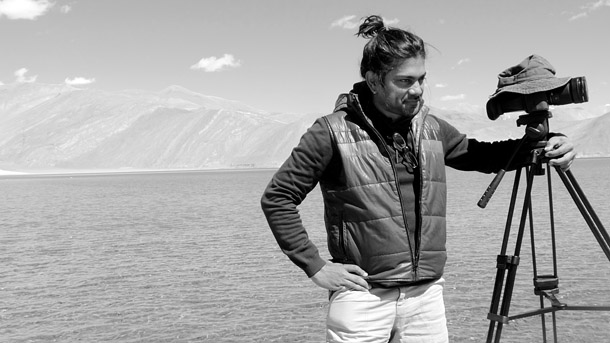 Indian director Padmakumar Narasimhamurthy’s debut movie “A Billion Colour Story,” which delivers a message of hope about discrimination in Indian society, is being screened at the 21st Busan International Film Festival. [PADMAKUMAR NARASIMHAMURTHY]

BUSAN - Elaborately choreographed dance montages filled with bright colors and upbeat music are common in big-budget Bollywood films seen by millions around the world. These scenes, however, are not something that viewers should expect to see in “A Billion Colour Story,” an Indian film that premiered at the 21st Busan International Film Festival (BIFF) under the “New Currents” section, where rookie directors’ films are screened.

Revolving around an 11-year-old character Hari Aziz, who is born to a Muslim filmmaker father, Imran, and a Hindu mother, Parvati, the core message of Indian filmmaker Padmakumar Narasimhamurthy’s first film is to spread hope about Indian society and to make people believe that “there is poetry left in India.”

With an educational background in Australia and having parents that are open to diversity, Hari also learns to accept the differences of others, which makes him the target of jokes from classmates and teachers. Life is no easier for his parents, particularly for Imran, who faces all sorts of discrimination that threaten his career and family mostly due to his religion. Despite such a dire reality, however, Imran never loses hope in India, until Hari becomes the victim of discrimination.

Imran’s point of view towards the country is portrayed in black and white, but later changes into color when he loses hope in India.

“Black-and-white is a metaphor for purity [because everything looks the same in black-and-white],” Narasimhamurthy told the Korea JoongAng Daily during an interview last week, a reference to late French photographer Henri Cartier-Bresson’s quote that “color is a distraction.”

The movie, however, implies at the very end that the father regains hope through Hari, who proves to his father through crowdfunding on Facebook that Indians all around the world wish to share Imran’s faith in India by helping him complete his film, in which the protagonist had not been able to finish due to financial difficulties.

“It’s the fact that millions and millions of Indians have actually sent money [that counts],” explained the director, elaborating on the message of hope he is trying to deliver through his debut movie. “It’s not about how much money and it’s not about whether Imran got funds to complete his film. The fact that so many Indians shared [Hari’s crowdfunding] video and sent money to help someone make a film about India shows the reinforcement of faith. That’s the hope,” the director added.

To discuss more in detail about the movie and what he wishes to achieve from it, Narasimhamurthy sat down for an interview with the Korea JoongAng Daily on Saturday.

Q. The movie deals with all sorts of discrimination, based on religion and gender. How serious is discrimination in Indian society?

A. To give you a simple perspective, yesterday (Oct. 8), a very famous actor in India was stopped from playing a part in a Hindu play about Hindu God Rama. So, yes there are communal differences and they are beginning to rise up at this point and in the last couple of years. But I also believe that average Indians are very tolerant, love each other and [respect] religion. Unfortunately, however, the society is becoming very conservative. For example, in the film, an unmarried couple is told to vacate from the apartment. If you aren’t married, you can’t stay together, and that’s what happens in India, even in a city like Mumbai. [Hindu] people aren’t able to get apartments or rent if they go to Muslim realm. All that is prevalent. I like to believe that the average Indian is not like that and that’s the reason I made this film - to deliver hope.

Despite the hopeful message, however, it has a sad ending. Why did you craft it that way?

It has a very sad ending. It breaks your heart. But the idea of this film is also to wake people up and to think of ‘What’s the kind of the world we want to leave behind for our children?’ We are all adults, and communal strife is caused by adults. But what fault is that of children? That’s the reason for the tragic ending.

Imran, who is a director in the film, seems to represent you. Do Imran’s words match what you want to tell the audience?

Yes, that’s correct. While the situation is different, the personality is similar. Through Imran, [who believes in idealism], I wanted to say a lot of things. I’m an idealist. I believe in goodness, I believe in good people and I can never see anything wrong with anybody. And that is something that comes to Imran. I made Imran Muslim and his wife a Hindu just so that the movie includes different perspectives. Although some audience questioned why I deviated from Hari’s view to Imran’s point of view, I had to show the father’s suffering and crumbling.

Do you have any plans for your next project?

My next film will be “Distant Tear Drop.” Every story I have written is about building bridges. The next story will also be about building bridges. It’s a universal story that taps into humanity. I think art should make people think and it should touch people. Art should also give people a direction towards a better life. At least, that’s what I believe in and what I want from my films.