Requiem for our soldiers

Requiem for our soldiers 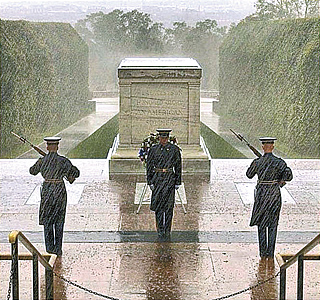 Soldiers of the 3rd Infantry Regiment maintain their vigil and stand guard at the Tomb of the Unknown Soldier.

The victims of a Navy helicopter crash received a belated spotlight five days after their funerals. In a poignant posting on Facebook, reserve real admiral Kim Hyeok-soo paid tribute to the victims and their families, giving attention that had been missing in the mainstream media. “None of the victims’ relatives wailed or blamed the Navy for the crash,” he wrote, describing an accident that killed the 33-year-old pilot and two other passengers in the aged antisubmarine Lynx helicopter, which fell into the ocean during a night drill in late September. “The mothers thanked the Navy for going as far as 1,030 meters (0.6 miles) under water to recover the bodies of their sons,” he continued.

There is always a sense of nobleness in the act of transforming grief and anger into greater sentiments through inner strength.

“Taking Chance” is a 2009 film inspired by the true story of a U.S. Marine — Lt. Colonel Michael Strobl — who volunteered to escort the remains of a 19-year-old soldier who was killed on active duty in Iraq back to his small hometown in remote Wyoming. The film tracks the 3,000 kilometer journey as Stroble accompanies the fallen Lance Corporal Chance Phelps to his home from the Delaware airport. There are few conversations in the film, and it does not force sentimental commentaries or implications. But every detail honors the dead. It’s a journey to ensure that he is laid to rest with the most proper respect that solemnly underscores the gratitude and sense of indebtedness a nation must feel to the soldier whose life has been cut short while serving his country. The film, which premiered on HBO in 2009, was watched by 2 million people. Its rerun was viewed by 5 million.

The captain of the airliner that carried his casket made a special announcement upon landing asking passengers to remain seated so that Lt. Co. Strobl has a chance to deplane first and render honors for PFC Phelps as his casket was unloaded. All the passengers solemnly and patiently sit through the ritual. On landing, an impromptu funeral procession forms along the highway as drivers make way for the hearse and others dip their lights to show respect. Not one car dares to pass the slow procession.

One photo went viral when Hurricane Sandy, one of the most powerful storms to date, hit the eastern coast in October 2012. The picture showed soldiers of the 3rd Infantry Regiment maintaining their vigil and standing guard firmly at the Tomb of the Unknowns under the heavy bands of rain that slammed the Washington D.C. area. The tombstone says, “Our regiment has been guarded continuously since 1948.”

President Barack Obama manned the situation room at the White House to direct the battle against Sandy and won re-election later in the year.

A torch at the center of the Tomb of the Unknown Soldier at the Kremlin Wall in Moscow bears an inscription that reads, “Your name is unknown, your deed is immortal.” The memorial is the first place newlyweds visit. Westminster Abbey is where kings and historical figures lie in rest. The most sacred part is the west end, which houses the grave of the Unknown Warrior. In it are remains of unidentified British servicemen from World War I. The place is sealed off to visitors and only accepts flowers. Under Royal tradition, the Duchess of Cambridge laid her wedding bouquet at the grave of the Unknown Warrior.

The U.S. Department of Veterans Affairs is the second largest government office in the United States. The government refers to its surviving families as “Gold Star Families.”

One Korean president once said that one can rot while serving in the military. We habitually poke fun at servicemen. But it was the coast guard who went into a perilous sea to save a life and a fire fighter that lost his young life on the rescue scene when a powerful typhoon hit the southern coast last week. The country cannot survive without servicemen in various uniforms risking their lives to protect others and this land. We offer belated but sincere respect to the soldiers who died in the helicopter drill and condolences to their families.