Government has collected more taxes so far this year

Government has collected more taxes so far this year 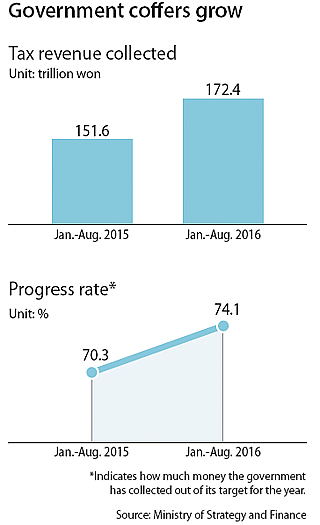 The government has collected more tax revenue so far this year compared to the same period last year, largely from an increase in corporate taxes as Korean companies saw their profits grow, according to the latest figures released Tuesday by the nation’s tax collection agency.

According to the Ministry of Strategy and Finance, the government collected 172.4 trillion won ($154.3 billion) in taxes as of the end of August, a 13.1 percent increase from the same period last year.

The government is performing better this year in terms of reaching its year-end target. The revenue collected so far accounts for 74.1 percent of the 232.7 trillion won target set for 2016, an increase of 3.8 percentage points from the same time last year.

“Companies have become more profitable, and the government’s decision to revise some of the tax laws applied to companies has helped revenue go up as well,” said an official at the Finance Ministry.

Companies listed on local stock indexes reported that their net profit before taxes grew 18.7 percent from 53.4 trillion won in 2014 to 63.3 trillion won last year. This along with the elimination of tax cuts and exemptions on certain investments helped increase revenue.

From value-added taxes charged on purchases of goods and services, the ministry said it collected 44.9 trillion won, an increase of 18.1 percent from last year.

“The real estate market strengthened, and there were more self-employed who filed income taxes this year,” the ministry said in its monthly report. “Private consumption in the first half of this year also improved compared to the previous year.”

Consumption by households has indeed remained high for the past few quarters, rising 3.3 percent year on year during the fourth quarter last year and marking 2.2 percent and 3.3 percent during the first and second quarters of this year.

Overall, taxes made up 61.5 percent of the 280.3 trillion won total revenue that the government earned from both taxes and other revenue sources during the first eight months of the year. The ministry said it spent 264.5 trillion won in the same period, recording a surplus of 15.7 trillion won.

The ministry noted, though, that the outlook for the rest of the year might not be as positive as it was in the first eight months of the year.

“The government’s decision to execute a financial stimulus package, including a supplementary budget, will take its toll starting from September’s data, and we expect the surplus we recorded might drop down a bit,” the ministry said.