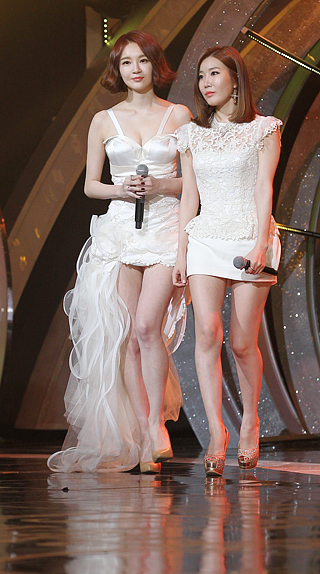 Vocal duo Davichi will return with not one, but two singles off of their upcoming mini-album “50 X HALF” on Thursday.

According to a message posted by the duo on their official Instagram account on Tuesday, the two have decided to release two songs to drum up interest in their newest mini-album. The group held an online poll on Naver to decide whether the “addictive” song or “healing” song would be the mini-album’s single. The duo also posted an image of the new record’s track list.

Although the “addictive” song won the majority of the votes in the poll, the “healing” song put up a tough fight, and the group said that fan reception towards both songs was so well-received that they chose to promote both tracks.

The first track was written and composed by Jeon Hae-sung, who previously worked with the duo on their previous songs “Don’t Say Goodbye” and “The Letter.” The second track was created by hitmaker XEPY, who previously produced songs such as “Some” by Soyu and Junggigo and the ballad “Making a New Ending for this Story” by vocalist Han Dong-geun.

The two will join the rush of artists promoting in October, including boy bands BTS and SHINee.