End of road for Galaxy Note7 as production ended

End of road for Galaxy Note7 as production ended 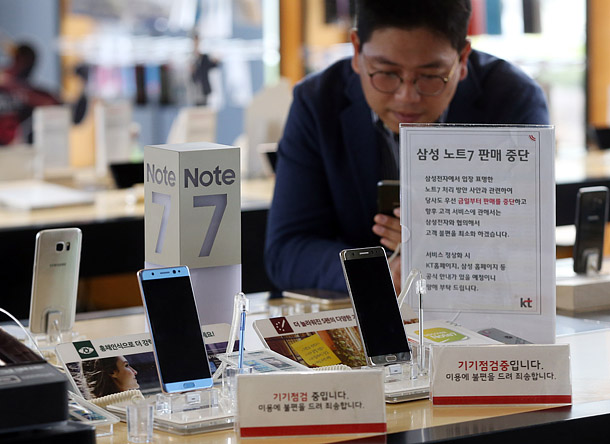 A sign at a smartphone store inside the KT headquarters in Gwanghwamun, central Seoul, on Tuesday shows sales of Galaxy Note7s have been suspended. [KIM SUNG-RYONG]

Production, sales and exchanges of Samsung Electronics’ Galaxy Note7 are now officially suspended across the globe, bringing the nation’s No. 1 smartphone maker close to retiring the Galaxy Note7 model for good.

Samsung Electronics confirmed Tuesday evening that it decided to stop production of its latest phablets following a sales and exchange suspension announced in the morning.

“We will stop producing Galaxy Note7 along with the stopping of sales since consumer safety is our top priority,” the company said through a regulatory filing less than 24 hours after it said it was “adjusting the global supply.”

It also detailed exchange details for the device, which will begin on Thursday and go through the end of this year. Customers replacing the phablet with another Samsung phone will receive 30,000 won ($26.72) in gift vouchers, Samsung said.

Earlier in the day, Samsung Electronics said it was suspending global sales and exchanges of the latest phablet, concluding that the replacement devices are also unsafe.

The company warned Galaxy Note7 owners to “power down” and “stop using” the device since it is prone to burning up.

“We have reached a conclusion to stop selling and manufacturing the Galaxy Note7,” said Samsung Electronics in a statement issued Tuesday. “The investigation is still ongoing but we came to this decision because we consider the safety of our consumers a top priority,” the company said, adding it will “ask all global partners to stop sales and exchanges of Galaxy Note7s.”

The Galaxy Note7, which was briefly hailed as the most innovative handset in history with its waterproofing and iris-scanning security function, is on the verge of being discontinued.

“No one should have to be concerned their phone will endanger them, their family or their property,” he said, adding, “I also appreciate the safety leadership role the wireless carriers and retailers are playing by temporarily stopping the sale of the Note7 and not providing the Note7 model as a replacement device.”

The CPSC is currently looking into multiple cases of replaced Galaxy Note7s burning up, including one in which passengers had to evacuate a Southwest Airline plane.

Last weekend and on Monday, major mobile carriers in the U.S., including Verizon, AT&T and T-Mobile, the top three players in the industry, suspended sales and exchanges of the problematic phablets.

“This is by far the biggest concern I have seen in cellphones during my tenure,” Verizon CEO Lowell McAdam was quoted as saying on CNBC, calling the incident a “black eye” for Samsung.

Following the announcement of Samsung Electronics on Tuesday, SK Telecom, LG U+ and KT - the dominant Korean telecoms - banned sales of new Galaxy Note7 and exchanges of the recalled products starting from Tuesday.

Samsung has played its most radical damage control card to prevent further damage to its brand.

But the nation’s top IT company still awaits the result of investigations by the CPSC in the U.S. and Korean Agency for Technology and Standards. The Korean Agency for Technology and Standards, a government body responsible for inspecting problematic products, issued a statement Tuesday, saying they found a “possibility of defects in the replaced Galaxy Note7,” based on research and discussions held by the government, Samsung Electronics and privately-run science institutions.

An official at the agency delicately raised the possibility that the new burning cases were caused by something “other than battery defects.”

“We have not yet concluded what caused the recent incidents, as there were relatively fewer cases than with the first version of the products,” said the official.

“The appearances of the reported cases for the first versions were very similar, involving the upper right part of the battery, resulting in burnings. However, this time, the cases show a possibility of different parts being the problem,” the official added.

Samsung Electronics hasn’t officially confirmed what they will do with the Galaxy Note7 model in the future - whether they will re-sell handsets once every safety concern is settled or discontinue the model completely.

Industry insiders are encouraging it to retire the model for good.

“They skipped the Note6 and went straight to releasing the Note7, saying they had empowered the gadget by that much,” said Lee Seugn-woo, an analyst at IBK Securities. “However, it seems they got over their heads this time. It will take much time and effort to recover the damage to the brand’s image from this case.”

“Samsung Electronics should focus on the Galaxy S8, which is scheduled to launch in the first half of next year,” said Kim Ji-san, a researcher at Kiwoom Securities. “There is speculation that Samsung may bring forward the launch of the S8 to overcome the recall crisis and regain consumer confidence. They would have to focus on quality management this time for sure.”

Negative comments on the Galaxy Note7 dominated the foreign press.

American IT media Mashable ran a slew of related articles under the headline “R.I.P.: Samsung puts the final nail in the Note7’s coffin.” One of its articles said it is “retracting its recommendation of the Samsung Galaxy Note7.”