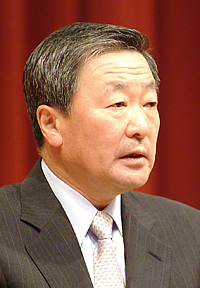 LG Chairman Koo Bon-moo on Tuesday emphasized at a seminar in front of top managers the need for innovation in order to break through difficult times.

“We only have two months left for 2016,” said Koo in front of 300 senior employees and CEOs, “this is the time for each subsidiary to look back and complete core projects that we’ve planned earlier this year.”

In his New Year’s speech, Koo expressed determination to develop businesses that use advanced technology, such as vehicle components, new energies or the Internet of Things, which was a core theme of its electronics department this year.

For next year’s plans, Koo stressed the importance of preparing in advance by understanding market conditions, including exchange rates and aspects of competition in each industry.

“We’re going through a difficult time with the continued worldwide economic slump,” said Koo. “Nevertheless, LG has a history of reversing difficulties and I believe we will able to overcome once again.”

An LG spokesman added that this shows the chairman’s will to continue investing in innovation and development in new business areas, regardless of global economic stagnation.

After the speech, Park Jin-woo, professor of industrial engineering at Seoul National University, gave a lecture on “manufacturing based on smart factories.” Park is also head of the joint private-public project to support smart factories.

Park suggested ways to enhance the “smartness” of domestic manufacturers over the long term, such as hiring professionals to operate smart factories and diffusing major companies’ expertise to small and medium companies so that the whole manufacturing industry can become a part of smart manufacturing.