‘To be president, preparation matters more than mere will’

‘To be president, preparation matters more than mere will’ 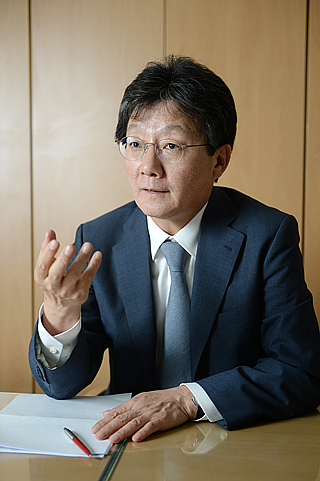 Ruling Saenuri party lawmaker Yoo Seong-min, a key adversary of Park and her loyalists, recently raised his voice on key topics such as the Mi-R and K-Sports foundations that created serious conflict during the audits of the government by the National Assembly.

“The Federation of Korean Industries [FKI] should break up for the better,” the 58 year-old four-term lawmaker said on speculation surrounding the two foundations. He also pointed out that there could be an economic crisis next year much like the Asian financial crisis.

He even referred to President Park’s defense for a scandal-ridden Senior Presidential Civil Affairs Secretary Woo Byung-woo as a “lame duck phenomenon.”

Yoo, an unlikely figure to be favored by youths and middle-of-the-road voters among leaders from the Saenuri Party, stresses, “Conservative reform is the only way to survive in the presidential election.” The JoongAng Ilbo sat with Yoo, who frequently visits universities for seminars on politics, at Seoul National University.


Q. Wasn’t it out of character for you to remain so quiet during the ruling Saenuri Party’s week-long boycott of the National Assembly’s government audit?

A. I missed the first general meeting of the Assembly members due to urgent family affairs. I participated in the next one but the party had already decided to protest. I looked for chances and said “the parliamentary audit must go on” at a senior leaders’ meeting. I was disappointed to find no one except for me and Rep. Kim Moo-sung expressing such an opinion. National Assembly Speaker Chung Sye-kyun was too adamant.


What do you think of Chung’s conduct?


Many point out the ruling party is only studying the actions of the Blue House.

I am concerned, as well. But I doubt there would have been actual orders from the Blue House to push the party. It was too much for the opposition to be demanding the dismissal of Agricultural Minister Kim Jae-soo. At the point where suspicions surrounding Kim were proved ineffectual, I don’t think they should have submitted a motion.

Also, while past presidents approved the dismissal once the motion has been passed, Park rejected it, which gives ground for the opposition party to pose a problem. It’s one-on-one for the National Assembly and the government administration. This should have been the end, but when our party leadership went back at the issue aggressively, I think it was too much.


While 70 percent of the Saneuri Party members are pro-Park, some point out non-mainstream members lack a pivotal figure.

It’s true that a majority of the members are pro-Park. But they can’t be hardliners throughout. Lawmakers are sensitive to public sentiment. Just because they are pro-Park, they can’t go against the public and follow orders from the Blue House.


There are rumors you will leave the current party and make new attempts from a third ground.

I love the party so much. Why do people keep trying to pull me out of the party (laugh)? I believe the leadership will fairly manage the party elections. In fact, it’s not easy to be unfair.


Despite the party constitution and rules, you have been pulled down from the floor leader position and excluded from official nomination.

It happened in the general election. Young and competitive lawmakers also lost the chance for nomination just because they were close to me. That’s why our party won only 122 seats after bragging it would dominate 180 seats. If this is repeated for the party nomination race, we are heading straight to failure.


If you attempt to be elected as the party’s nominee for the presidential election, wouldn’t you be competing with pro-Park candidates?

Well, I haven’t even said I would be running for the presidential election (laugh). If I were to compete, I think the more candidates, the better. This presidential election is expected to be a judgement on the past Lee Myung-bak and Park Geun-hye administrations. It is not going to be easy.

So if there’s anyone wanting to run for the presidency under the Saenuri Party, the door should be open for everyone to compete for the nomination race and vote for a reformist. To do that, the race must be fair. The party leadership should not be favorable towards a certain candidate.


Would the door be open to Sohn Hak-kyu, former adviser to the main opposition Minjoo Party of Korea, and Ahn Cheol-soo?

Yes. Sohn, of course, was a member of our party before. Kim Boo-kyum, a four-term lawmaker of the Minjoo Party, as well. As for Ahn, he stresses reform for the economy and is a conservative when it comes to security. A person like him should [run for our party nomination race] rather than thinking of building up a third party somewhere else.

If he takes part in the party nomination race, I would welcome him. Hopefully, he steps in to make the race more dramatic. But in the meantime, this country has other issues than just North Korean nuclear bombs. The public is curious about Ban’s solutions to the polarization of wealth and the low growth of the country’ economy. He will have to introduce his solutions and defend them at the race.


How about claims to crown Ban as the Saenuri nominee for the presidential election?

Crowning? Who says such a thing? It is impossible based on the party constitution and regulations.


When will you announce whether you will run for presidency?

I am not sure if it will be the end of this year or the beginning of next year, but I will announce it by then. I know by my character that I won’t just consume time.

People say I lack the will to attain power, but those with will who lack preparation should not become president. It will only become a failure in the end. So, I need to take time and prepare.

I’m not trying to knock them down. What I mean to say is that with the current corporate governance structure, it is impossible to innovate and grow. We should give guidelines to conglomerates so they can do business within that boundary and grow to become No.1 in the world.

They shouldn’t burden the public due to lax management of the company, but they are. Insolvent companies should be eliminated early on. As for shipbuilding and the shipping sector, the country knew of the troubled management situation several years ago but was dragging its feet, and so it all came back as a burden on the public.


So companies like Daewoo Shipbuilding & Marine Engineering should be eliminated immediately?

Yes, of course. We have to consider the trouble of the workers and supplier companies to DSME, but insolvent companies must be cleared up.

Also, I oppose the idea of letting conglomerates build up centers for a creative economy and innovation at each of the nation’s 17 provinces and metropolitan cities. There’s no change because [conglomerates] step on sprouting small innovative companies.