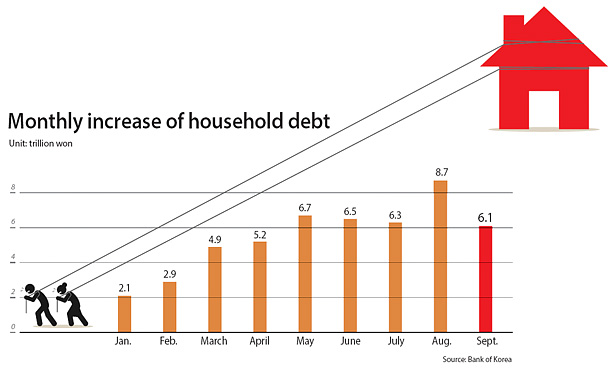 Household debt continued to rise in September despite government efforts to rein in ballooning debt, new figures released Wednesday show, and banks have been asked to impose stricter standards in their loan issuance to curb the numbers.

The increase was the second-highest September figure since records began being kept in their current form in 2008. As September typically sees lower demand for loans due to special bonuses given out for the Chuseok harvest holiday, the average debt increase in September between 2010 and 2014 was 1.6 trillion won.

The September reading was particularly disappointing because market watchers expected that measures announced in August would reduce the size of loans. The Ministry of Strategy and Finance had pledged to tighten requirements for mortgage loans taken out by groups of borrowers looking to buy several apartment units. It also asked the state-run Korea Land & Housing Corporation to reduce the supply of apartment units on the market.

In its latest measure to slow the impact of rising debt on the financial sector, the Financial Services Commission, the country’s financial regulator, is pressing major banks to tighten screening on loans, especially mortgages.

Earlier this week, Yim Jong-yong, chairman of the Financial Services Commission, said it would strengthen monitoring of local banks and other lenders to curb household debt.

The amount represents a 42 percent decrease from a year earlier, according to data compiled by the banks.

Analysts project that the growing debt number will push the Bank of Korea to hold the key rate at its record-low 1.25 percent for October during a rate-setting meeting today.