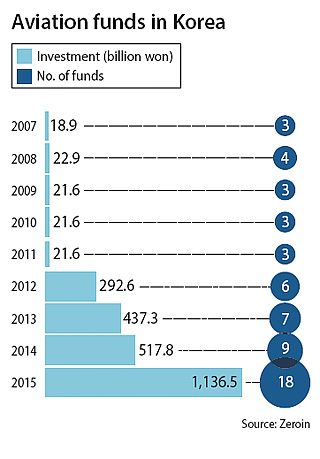 Investors seeking better returns at a time of low interest rates are looking to the skies.

The world’s aviation-related financial market has been growing and according to one of the world’s leading aircraft manufacturer, Boeing, this market will reach $172 billion by 2020.

Aviation funds buy stock in airlines, airplane leasing companies and sometimes even the airplanes themselves.

A B737-800, the most popular aircraft among low-budget Korean airlines, costs $96 million.

Airlines don’t buy all the aircraft they need. Sometimes they lease them or buy them through a loan. That improves airlines’ cash flow and offers flexibility in case of a significant drop in the number of people traveling abroad due to recession, an epidemic or terrorism fears.

“We’ve been enjoying an annual profit between 4 and 5 percent since we started,” said a Hyundai Asset Management official who has been managing an aviation fund since 2012.

The prospects for such funds are good because demand for aircraft has been steadily increasing.

According to Boeing and Airbus, demand for new aircraft is expected to amount to 38,000 units by 2033, including new planes and upgrades.

“In the case of aircraft, there’s little risks of price fluctuations because the supply is limited to Boeing and Airbus, which dominate the market,” said Choi Jin-woong, a researcher at KB Financial Group.

Another advantage is that these funds are not affected by other markets such as stocks, bonds or commodities.

According to Dongbu Securities, the Ascend Aircraft Investment Index, which demonstrates the performance of aviation-related financial investments, had a low correlation to the performance of the S&P500, raw materials and even property prices.

“Aviation investments can be used [by investors] as an investment diversification tool in securing stable long-term profits,” said Jung Seung-ki, a researcher at Dongbu Securities.

Investment in aviation funds in Korea has grown from 18.9 billion ($16.82 million) won in 2007 to 1.14 trillion won as of 2015.The 18 funds investing in aviation finance and the size of investment doubled last year as the Korean central bank kept interest rates historically low.

Currently those funds are managed as private equity funds. But starting next year, publicly offered aviation funds are expected to be introduced.

“After building our experience through private equity funds and solving several systemic problems, we plan on launching a publicly offered aviation fund next year,” said an official at Truston Asset Management.

The biggest risk in investing in such a fund is the possibility of an airline going bankrupt. Shipping-financing funds suffered huge losses from Hanjin Shipping, Korea’s No. 1 shipping company, going into court receivership.

Yurie Asset Management’s aviation fund, which was managed between 2008 and 2010, suffered massive losses when a Thai budget airline went bankrupt. The company created a fund that attracted 9 billion won from investors including KB Life Insurance that was used to buy an aircraft that was leased to the budget airline for a route between Incheon and Thailand.

However, after political unrest led to the closing down of an airport in Phuket, the airline went out of business before the fund reached its maturity in October 2010. KB Life Insurance filed a lawsuit against Yurie Asset Investment and Hyundai Securities, which marketed the fund.

Unexpected epidemics of contagious disease or terror incidents can also affect the number of people traveling, which could affect the return on aviation funds. Investors can face losses trying to sell aircraft in the secondhand market.