BMW i3 is quiet pleasure to drive

BMW i3 is quiet pleasure to drive

Left: BMW’s first fully electric car, the i3, can drive up to 132 kilometers (82 miles) with one charge. Above: An LED around the charging plug changes color depending on how much the vehicle is charged. [BMW KOREA, JIN EUN-SOO]

JEJU - German luxury car maker BMW has a solid fan base in Korea, but the electric vehicles launched in 2013 haven’t really caught on.

The automaker says green cars are a key product for the coming years, along with autonomous and connected cars. 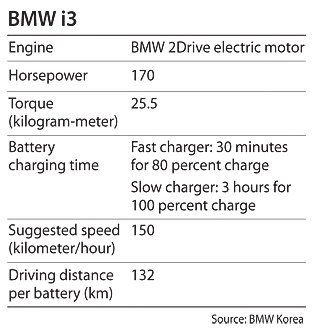 The impending launch of Tesla Motors in Korea is expected to inject new excitement into the market for electric vehicles (EV) - and pose some challenges to companies already marketing EVs, including BMW.

It delivered a high-quality driving experience typical of an electric car: the ride was smooth and quiet and the design futuristic.

The test drive was about 30 kilometers (18.6 miles) from Jungmun Resort Complex around Mount Sanbang, which encompassed straight, curvy and sloping courses.

Like all EVs, the i3 made a minimal amount of noise. The grumbling, rolling noise of an engine was replaced by the cold, sharp sound of a battery motor working.

Even on bumpy and curvy roads that worked their way around Mount Sanbang, the agile i3 smoothly worked its way through the course. Trivial bumps didn’t even register.

Another interesting feature of the i3 is the no B-pillar design, which allows the vehicle to open its doors coach style. With the front and rear doors open together, the interior look spacious. In fact, the feature could be inconvenient because the back door opens only when the front door is opened.

To make the best use of the battery, the vehicle instantly slows when one’s foot is removed from the accelerator. The battery is being charged from the kinetic energy propelling the vehicle forward. There is almost no need to step on a brake pedal. This is something a driver certainly has to get used to.

A spin in the i3 on the island provided sheer driving pleasure throughout.

However, a fully-charged battery can only drive 132 kilometers, compared to superior performance by other EVs in Korea such as Hyundai Motor’s Ioniq, which goes nearly 200 kilometers. The i3’s price starts from 57.6 million won.

The lack of charging infrastructure is another point potential buyers must consider.

BMW-only charging stations, which give an 80 percent charge in 30 minutes, are not yet abundantly installed nationwide.

BMW is trying to build up infrastructure in Korea, and has formed partnerships with E-Mart and Posco ICT to install charging stations. They have been set up at some 80 E-Mart branches. In total, BMW Korea has some 200 stations nationwide.

When charged from ordinary charging stations, it takes three hours.

EVs have a long way to go in terms of mass popularity. As of July, 5,767 EVs have been registered in Korea, slow progress considering the government’s aim of expanding that number to 250,000 units by the end of 2020. There are 337 charging stations for homegrown EVs, meaning an average of 17.1 vehicles share one charging station.

Tesla Motors will open a showroom in Korea by the end of this year and may start selling by next year. That could bring major momentum to the EV market.

“The Tesla S model [which recently went through noise and gas emission level tests in Korea] can drive up to 600 kilometers on one charge and is known to be the third best performing car in terms of accelerating force,” said auto analyst Lee Jae-il from Shinyoung Securities.

“The EVs that people know about can only drive around 100 kilometers and aren’t very fancy cars. Tesla Motors’ launch in Korea will turn around that thinking, perhaps giving the public a new impression that EVs are high-performance cars.”