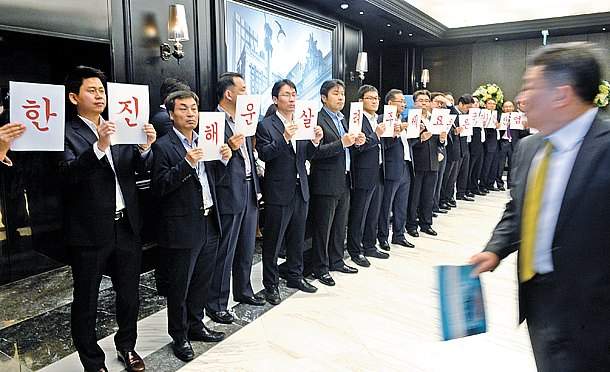 With the outlook bleak for Hanjin Shipping, the Korea Shipowners’ Association on Wednesday came up with suggestions to turn what was once the nation’s top shipping line into a midsize company in order to fully exploit its established networks and systems before it falls further.

Industry insiders gathered Wednesday for the Maritime Korea forum to find a way out of the logistics disturbance caused by the sinking of Hanjin Shipping, at the Kensington Hotel in Yeouido, western Seoul.

“Hanjin Shipping should be restructured into a [midsize] container shipping company operating more than 50 vessels carrying up to 400,000 twenty-foot equivalent units specifically catered to routes bound for the Americas, while cooperating with regional shippers for the relatively closer intra-Pacific routes,” said Kim Young-moo, executive vice chairman of the Korea Shipowners’ Association, the main presenter at the forum. The association represents roughly 188 ship-owning companies in the country.

“Whether to revive the original company to use the name value of Hanjin Shipping needs some debate,” Kim said. “As there is roughly $700 million in unpaid debt that the company has to take care of to resume normal operations, creditors need to agree on the option.”

Kim said another option may be to create a completely new company out of Hanjin assets.

In the meantime, Hanjin Shipping’s clerical workers have established a labor union, which was approved by the government on Tuesday. Chung Sung-hwan, the union’s head, said workers from the ailing company should not be abandoned and made a plea to shipping industry leaders to ensure they would have jobs at other companies or institutions.