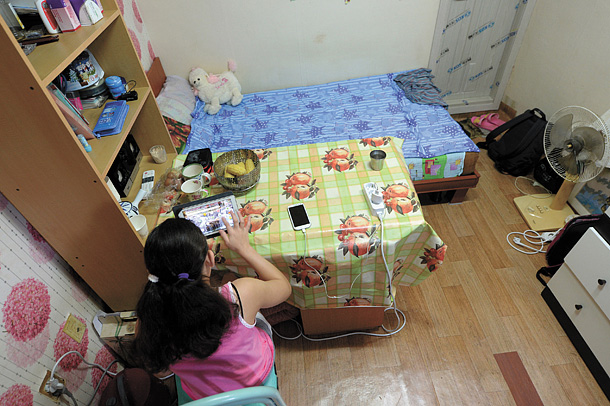 A 12-year-old Russian girl spends time alone at home in Asan, South Chungcheong, while her Korean dad - her only parent - goes to work during the day. Over 10,000 students are estimated to have arrived in Korea without finding places in schools, due mainly to language barriers. [OH SANG-MIN]

Twelve-year-old Aziz can barely speak Korean. He had no need to learn the language until recently - when his mom married a Korean man. When Aziz moved from Uzbekistan to Asan, a rural city in South Chungcheong 54 miles south of Seoul, earlier this year to live with his new stepdad, life took a turn to the strange.

In Korea, he had no friends. He knew nothing about the culture. Life couldn’t have been more different from Uzbekistan.

Aziz, a pseudonym, started school at Shinchang Elementary School this semester. He has around 30 classmates, but nobody he can relate to. Not even his teacher. Making eye-contact requires a lot of nerve. Sometimes he doesn’t have it.

“He’s really clever,” said his teacher. “He mastered reading Korean in only two weeks. But he still has difficulty communicating with others, which makes school life in general hard.”

Aziz is just one of 37 students at Shinchang Elementary School who spent their earlier childhood in a different country, and whose mother or father - or both - are non-Koreans.

The figure soared from just five in 2014, with students mainly coming from Kazakhstan, Uzbekistan, Kyrgyzstan, Ukraine, Belarus and Vietnam. (Asan is known to be heavily populated by foreigners from that region. Most of the foreigners’ husbands are farmers.)

Across Korea, there are thousands of students with similar backgrounds as Aziz. According to statistics from the Ministry of Education, the figure rose from 4,288 in 2012 to 7,418 as of April this year, a 73 percent jump.

Their backgrounds are similar. So are their difficulties adjusting to Korea. Over 10,000 students are estimated to have arrived in Korea without finding places in schools. Their parents can’t speak Korean, aren’t informed about the education system, or simply don’t care about education, teachers say.

A major loophole in Korea’s legal system is that parents aren’t punished if they don’t send a foreign child to school.

For Korean kids, elementary and middle school is compulsory, and violators (or their parents) are fined a maximum 1 million won ($891).

“Foreign parents come to schools with their children all set to finally send them to classes, only to realize they don’t know anything about the necessary procedures,” said Kim Hyun-sook, vice principal of Shinchang Elementary School.

On the school’s part, nobody can speak the mothers’ languages, which complicates communication problems even more. “We relied on the automated translator from Google to rewrite our admissions forms into Russian,” said Kim.

After that first hurdle, parents struggle to converse with the teachers. When sending out school newsletters, teachers rely on members of the local community to do translations for them. Neighbors who speak a foreign language are invited to a chat room in the smartphone messenger app KakaoTalk, and asked to interpret what the teacher is trying to tell the foreign parent. Faculty at Shinchang Elementary School say they don’t have the budget to hire teachers’ assistants who can speak Russian or other languages, like some successful schools in Seoul.

Kids who fail to fit in at school, said Kim, end up developing psychological issues, such as depression.

“We had one kid who returned to school after taking a year off, and the problem with him is that he would ceaselessly cry at the top of his lungs over the smallest of issues,” Kim recalled. “He was used to spending time alone, so I think he was stressed out over the sudden change of environment.” 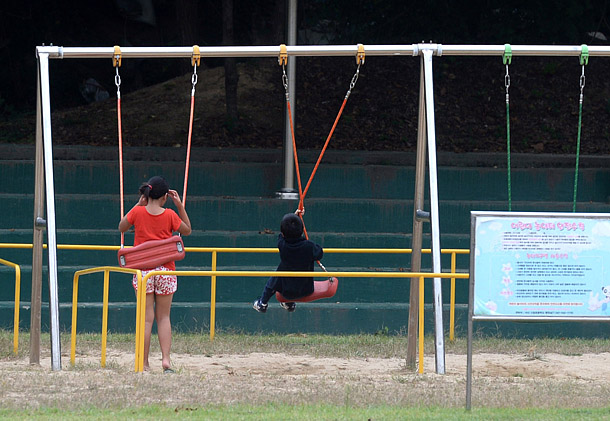 Students play on the swings at Shinchang Elementary School in Asan, South Chungcheong, where 37 foreign-born students are enrolled. [OH SANG-MIN]

A 21-year-old Chinese woman, who declined to give her real name, said she came to Korea three years ago and enrolled in a local high school, only to find life much harder than what she had expected. She was born to a Korean mom and Chinese dad, both working at a factory in Gyeonggi. She knew little Korean.

She managed to go to school for a year. She dropped out and spent the next two years juggling different jobs, working part-time at a convenience store, hair salon, cellphone manufacturing factory and Taekwondo studio.

“It’s really hard to adjust to Korean society if you arrive close to adulthood,” she lamented.

In another case, 12-year-old Natasha (a pseudonym) arrived in Korea six months ago after her Russian mom divorced her dad, who is an ethnic Korean with Russian citizenship. Now, she spends the entire day trapped in a single-room house in Asan, South Chungcheong.

Her dad leaves home at 5 a.m. and returns after 6 p.m. Her only companion is a 7.9-inch tablet that her dad bought her as a birthday gift last December. When asked why he wasn’t sending Natasha to school, the father said he “doesn’t know how.”

Yang Seung-joo, a researcher at Hanyang University’s Institute of Globalization and Multicultural Studies, said a key problem with these children was that basic Korean wasn’t taught at schools, but usually at some sort of a community center.

“They arrive in Korea at really sensitive ages,” Oh Seong-bae, a professor of education at Dong-A University said. “It’s not right to force them to adopt Korean culture as fast as possible.” He said teachers and schools should acknowledge the cultural differences and enable the students to find a right balance between their two worlds.

Another education professor, Hyun Young-sub of Kyungpook National University, said Korea needs a “surveillance system” through which parents can be closely monitored to see if they are sending their kids to school.

The current system lacks the necessary vigilance, he stressed. “Under the status quo, nobody can force foreign parents.”