‘Godmother of Golf’ retires after 20 years in the sport

‘Godmother of Golf’ retires after 20 years in the sport 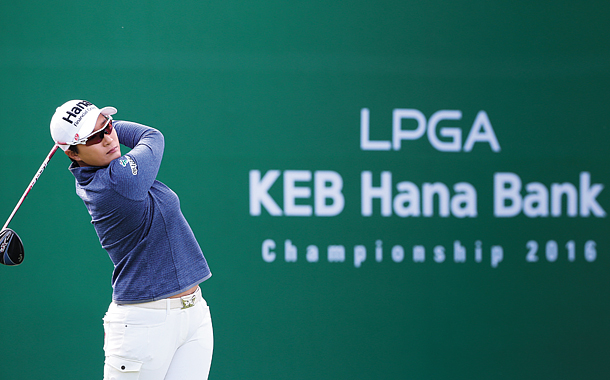 Korean Hall of Famer Pak Se-ri, an inspiring figure in Korea who became famous with her 1997 performance during the U.S. Women’s Open, bid her farewell to the LPGA on Thursday during this year’s LPGA KEB Hana Bank Championship, the only LPGA event in Korea. With Pak retiring from professional golf, Chun In-gee has become the rookie of the year at this year’s U.S.-based tournament.

During the third event of the LPGA’s Asian swing of the season at the SKY72 Golf & Resort in Incheon, Korea, Pak held her retirement ceremony while hundreds of people in the gallery, as well as younger golfers such as Park In-bee, who nurtured their dream to become the famously known “Se-ri kids,” came to tip their hats to her.

Pak had already wrapped up her career in the United States during this year’s U.S. Open, the very tournament that commemorated the outset of her decorated career 18 years ago. 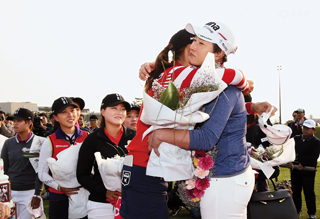 Pak Se-ri, right, is congratulated by younger Korean golfers during her retirement ceremony on Thursday after the first round of the LPGA KEB Hana Bank Championship in Incheon, Korea. [NEWSIS]

Nearly two decades ago in the southeastern Wisconsin city of Kholer, a golfer from Korea, a country little-known in the world of golf, took off her shoes and socks to salvage her ball on the edge of a water hazard. This was the start of a career that the LPGA now dubs as “living legend.”

After she began her career by taking her first two wins at two different major events, Pak would eventually go on to become the “godmother of Korean golf,” as Golf Digest puts it, pioneering the way for Korean golfers in the LPGA. At the moment, there are 34 active LPGA tour members from Korea, the largest number of international players in the U.S.-based tour, 21 more than Thailand, which is second in the number of players, according to the LPGA.

The Rolex Rankings also shows a hint of Pak’s legacy. Right now, Korea boasts the most players in the top 10. Chun, the winner of this year’s Evian Championship, is ranked third in the world. Others in the top 10 are Kim Sei-young, No. 6; Park In-bee, No. 7, the only golfer in the history of the sport to win titles from four major championships and the Olympics; Jang Ha-na, No. 8; Park Sung-hyun, No. 9; and Amy Yang, No. 10.

In the lead up to her retirement before the start of the event in Incheon, Pak was quoted saying by the LPGA, “I know we have a couple more days to go here, and I’m not even sure that it’s going to hit me once we get through this tournament.”

Pak added, “As an athlete and as a golfer, and most of this is based on my experience, although our players are playing better, and this isn’t just for golf ... but for all athletes, I feel like we could have a better program or system in place where there is a place ... to practice or have a more systematic program in place that helps all athletes who are representing their families and more importantly Korea. I want to really improve those things.”

Despite her earlier statement, Pak was spotted crying during the retirement ceremony after the first round of the KEB Hana Bank Championship, just as she was when she made an emotional exit from the events in the United States in July.

“Thank you,” she said to the gallery present at the golf course to witness the end of an era marked by Pak herself. “I am truly a blessed person. Were it not for the support and love of fans, I would not be where I am today. I never expected such blessings as I retire to close a chapter of my life.”

Pak, who seemed unable to control her emotions, added, “From now on, I would like to dedicate my life to Korean athletes. I want to guide them in the right direction and I ask for continuous support and love.”

“In the 18th hole, I was crying from the tee shot until the last putt,” Pak said after the ceremony.

As Pak polished off her career, Chun proclaimed the start of what could become a career to continue Pak’s legacy by taking the rookie of the year title at this year’s LPGA. Chun aggregated a total of 1,223 Rolex Rookie of the Year points, 778 points ahead of runner-up Megan Khang of the United States. Like Pak, Chun claimed her first two LPGA wins at major events, last year’s U.S. Open as well as this year’s Evian Championship.