Affleck and Simmons bond over films and family

Affleck and Simmons bond over films and family 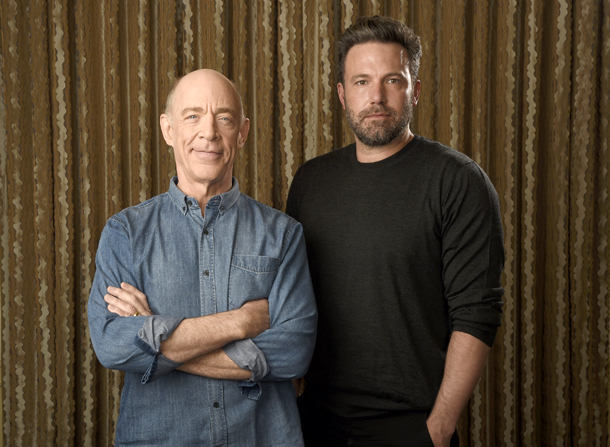 J.K. Simmons, left, and Ben Affleck star together in the upcoming film “The Accountant.” [AP/NEWSIS]

LOS ANGELES - Ben Affleck has been thinking about J.K. Simmons a lot lately.

The two are promoting their new film “The Accountant “ together as Affleck puts the finishing touches on his script for “The Batman,” in which Simmons will play Commissioner Gordon opposite Affleck’s Batman. The two also play the same characters in “Justice League,” which just completed filming and will be released next year.

“He’s in my head every night as I fool around with that character and hold his fate in my hands,” Affleck said.

The two Oscar winners bonded over their kids, sports and hosting “Saturday Night Live” while making “The Accountant,” and the rapport they developed set them up for their roles in “Justice League,” “The Batman” and beyond.

“You become more comfortable with somebody,” Affleck said. “I respected his work, and then to get to meet him and find out he’s such a great, down-to-earth, cool guy just means that when you show up on the next job, you know ahead of time (that) this will be fun. We’ll have a good time.”

“Joining that universe and recreating an iconic character that some wonderful actors have played before, so it was an intimidating enough process,” he said. “I was glad when I got to the set that I wasn’t meeting Ben for the first time in addition to all the other pressures I was facing.”

The characters they play in “The Accountant” and Batman movies have some similarities, too: Simmons is a law-enforcement guy and Affleck is gifted and elusive.

In “The Accountant,” Affleck plays Christian Wolff, an autistic math savant who handles finances for criminal enterprises like drug cartels and the Mafia. Simmons is the federal agent investigating him.

“We start from there, but nothing is as it seems,” Affleck said. “The relationship reveals itself as something different in the course of the movie.”

Affleck visited schools and spent time with autistic people across the spectrum to develop his character, one he found challenging, interesting and fun.

“I liked this guy a lot. I liked this character. I liked how contrary he was and how complicated he was, so it was fun for me to think about and try expressing myself _ I’m very verbal, you know, and that tends to be how I express myself. It’s not at all how this guy expresses himself,” Affleck said. “He’s very expressive, but in a lot of other ways. So that was really fun to try to explore.”

The character is a hero in his own way, and he has a complicated relationship with Simmons’ character, not unlike Batman and Commissioner Gordon.

“Well, it’s similar and it’s different, without giving away too much,” Affleck said. “One of the things that’s interesting about Gordon and Batman as Bruce Wayne is they are approaching the same problem from opposite sides of the fence and they have a unique affinity and empathy and appreciation for one another.”

“The Accountant” is in theaters Friday. AP