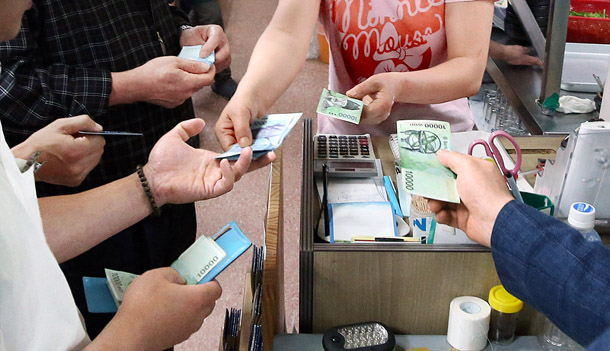 On September 28, a humanities forum was held at a hotel in Seoul, attended by foreign experts. The morning meeting went well, but something was awkward when it was time for lunch. There was an announcement, “Attendees to whom the Kim Young-ran Act is applied, please move to the next room.” Foreigners and general attendees enjoyed a nice boxed lunch, but some 50 professors and reporters had buffet with less choices to meet the 30,000 won ($26) per person guideline. A European diplomat later said that he felt quite uncomfortable.

An organization planning to hold a seminar in Germany also faces a dilemma. They planned a banquet, but it would be a challenge to prepare a meal for less than 30,000 won per person considering local prices.

While the direction of the regulation is desirable and right, various problems arose after the Kim Young-ran Act came into effect. Meetings between those who are subject to the law and foreigners are often tricky.

The Ministry of Foreign Affairs predicted the problem and announced the Kim Young-ran Act guideline on September 25. It states that meal cost limits would not be applied to diplomatic events, as the price restriction may hinder diplomatic efforts.

But the guideline has a tricky provision, “only for civil servants, including diplomats.” It means that scholars, journalists and civil organization staffs are excluded. It practically means that only diplomats can be invited to embassy events.

Public diplomacy emphasizing exchanges with citizens is highlighted nowadays. It is backward and outdated to only allow diplomatic channels with civil servants.

Former US Secretary of Defense Robert McNamara, considered the architect of the Vietnam War, listed the “Eleven Major Causes for the Disaster in Vietnam.”

One of the main causes was “our misjudgments of friend and foe, alike, reflected our profound ignorance of the history, culture, and politics of the people in the area, and the personalities and habits of their leaders.” The United States focused on the elites in South Vietnam and failed to understand public sentiment. If the United States had known how people really felt, the war would have been over sooner. There are many sensitive issues involving neighboring countries, from the North Korean nuclear threat to comfort women to Thaad.

Only allowing meetings with civil servants is virtually forcing “one-eyed diplomacy.” It is better to not see at all than seeing with one eye.