BUSAN - Forgiving a man that brutally killed one’s daughter is not easy, even for a saint. Giving mercy becomes more difficult if the killer is a son-in-law, who promised to forever love and take care of the daughter. That’s how Harumi from the Japanese film “Her Mother” feels when she learns that her only daughter Michiyo had been stabbed to death by her husband Koji.

Six years after the court ruled Koji to be sentenced to death, however, Harumi begins visiting her son-in-law in prison. Although Harumi initially made the visit in order to find out the exact reason Koji killed her daughter, her reason gradually changes, as she feels that the only person that understands her pain of losing a daughter is Koji. As she tries to file a petition to the Ministry of Justice to repeal Koji’s death sentence, conflict with her husband deepens.

Yoshinori Sato’s film, “Her Mother,” which has been played at the 21st Busan International Film Festival (BIFF) under the “New Current” section, featuring filmmakers’ first or second film, is based on a true story that happened in Aichi Prefecture around 20 years ago while the director lived there. The only difference in the real incident is that an older brother tried to stop the death sentence of a man that killed his younger brother instead of a mother trying to save her daughter’s killer.

“I decided to develop the story out of simple curiosity,” Sato told the Korea JoongAng Daily during an interview last week at the Busan Cinema Center. “This strange incident got me wondering why that brother made the choice to save his brother’s murderer,” the director added and further explained that he couldn’t easily let go of that incident in his head. 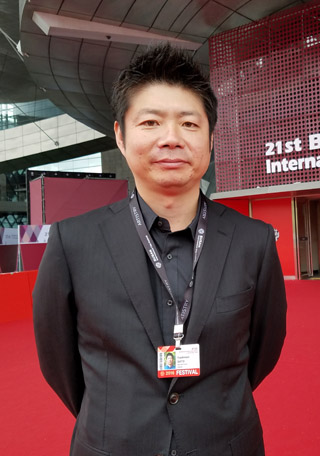 When asked whether he sympathizes more with Michiyo’s mother or father about dealing with Koji’s death sentence, the director said that he understands both sides.

“I tried my best to feature both perspectives without siding with a particular character,” said Sato, but he hinted that he wished to be able to become more like the mother if he were in her shoes.

The filmmaker shows through his film a blurred line between good and bad. Although some viewers may try to clearly define the good and bad characters, that is not what he wants from his audience.

“Any good person can turn bad and any bad person can turn good,” said Sato and continued, “I wished people to understand this without judgment and think about how anyone can change [depending on the situation they are put in] through the movie.”

One of the characters that notably shows how anyone’s goodness can turn wicked and vice versa is Harumi’s husband, who is introduced in the film in the beginning as a patriarchal husband that bullies Harumi and even tries to pin Michiyo’s death on her. Six years later, he changes after joining a religious group and claims that he forgave Koji. When he finds out that Harumi has been trying to save Koji from a death sentence, however, he becomes infuriated and does not hesitate to point a knife at Harumi.

Also, Michiyo, who the mother firmly believes had no faults, turns out to not be a saint either when the mother finally finds out her daughter’s secrets that were long hidden in her locked iPhone.

Although the film also touches on the death sentence, Yoshinori stressed that the main focus of the movie is not whether the death penalty is justifiable or not. “’Her Mother’ is not about the death penalty. If it were, it would have centered more on the system itself.”

Instead, the movie draws on the psychological state that Harumi goes through from the moment her daughter gets killed by Koji to the time she makes prison visits to Koji and realizes how emotionally comforting she feels when talking with the murderer.

Although the film leaves out some crucial details for the audience to figure out, “Her Mother” is clear in delivering the message that nobody is free from turning good or bad.