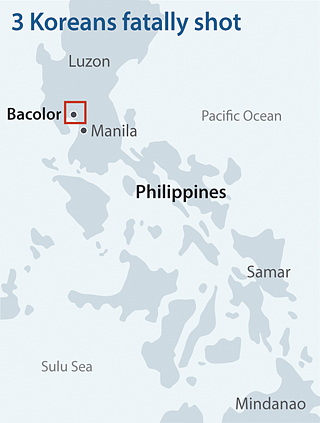 Three Koreans were found dead in a sugarcane field in the rural town of Bacolor, 75 kilometers (47 miles) northwest of Manila, with gunshot wounds to their heads, the Ministry of Foreign Affairs said Thursday.

The circumstances surrounding the killings were not immediately known. Korean government officials said Philippine police were investigating whether the Koreans got on the wrong side of locals.

It was the fourth incident of homicide involving Koreans in the Philippines this year. Six Koreans have been killed.

The Foreign Affairs Ministry said the victims were in their 40s or 50s and had gone to the Southeast Asian country to live. There was a “high chance” they weren’t family.

According to Korean government briefings, the bodies were discovered and reported to local police on Tuesday morning by a farmer living nearby. The victims were confirmed to be Korean national on Wednesday by officers at the Korean Desk working with the local police.
Bacolor has a population of roughly 30,000 people and is located 25 kilometers south of Angeles, where many expatriates live.

Details on when the victims were killed, how badly the bodies had decomposed or whether there are any suspects have yet to be released.

The Korean government has been concerned about the high number of Korean nationals killed in the Philippines in recent years. There were 12 Koreans killed in 2013, 10 in 2014 and 11 in 2015.

Korea’s National Police Agency sent four agents to the Southeast Asian nation last December to investigate the fatal shooting of a 57-year-old Korean. It was the first time Korean police dispatched investigators overseas to partake in a specific joint investigation.

In 2012, the government set up a Korean Desk with the Philippine police to handle crimes involving Korean citizens. There are six officers. At the Korean consulate, there are four police attachés.

Most of the cases occurred in Metro Manila, Cavite Province and Cebu, the country’s second most populous city.

About two-thirds of the murders were committed with guns. It is legal to possess a firearm in the Philippines. There are also some 1 million illegal firearms in circulation.