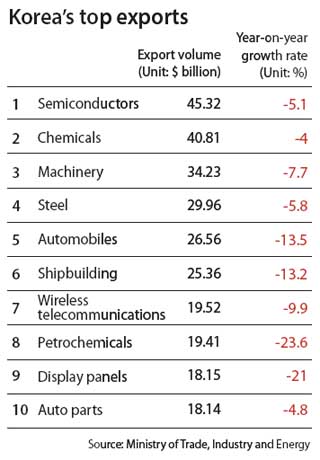 Sales of Samsung Electronics and Hyundai Motor accounted for 20 percent of the country’s GDP as of last year.

Automobile exports account for 8 percent of Korea’s total and telecommunications products account for 6 percent, which means that the two companies play a big role in the country’s economy.

Electronics and auto industries continued to rise, while other key sectors such as shipbuilding and steel, which were the best in the world in their prime, have fallen significantly.

Korea’s shipping industry is considered among the top 5 in the world, but has collapsed drastically. According to the United Nations Conference on Trade and Development, Korea’s shipping sector was on the global top 5 list in 2014. Korea’s economy is heavily depended on exports. However, local shipping companies lost their competitiveness as foreign shipping companies started to lower shipping fees.

According to Clarksons Research, a shipping analytics company, Korea’s global orders reached 223.4 million compensated gross tonnages as of the end of last month, the lowest in 13 years.

It is not much different for Korea’s IT sector.

According to AlixPartners, a consulting firm known for its work on turnaround cases, 17 percent of Korean IT and telecommunication companies have a chance of entering a debt workout program or court receivership within two years.

Korea’s electronics sector is facing challenges as it has failed to focus on newly growing sectors. Samsung Electronics is the only Korean company among the top 5 cellphone manufacturer in the world. LG Electronics’ global smartphone market share fell from 4.3 percent in 2014 to 2.7 percent in the first half of this year.

Hyundai and Kia Motors sold more cars than Ford in 2009 but their sales are expected to decline this year as competitors from Russia and Latin America are expanding globally. Hyundai and Kia sold 8.01 million cars last year and almost caught up to Renault-Nissan Alliance, the world’s fourth biggest automaker. However, Hyundai and Kia will likely fail to meet their goal of 8 million units this year. The recent strike by Hyundai Motor’s labor union is expected to contribute to a loss of some 3.1 trillion won ($2.7 billion) for the automaker’s manufacturing sector

In fact, Renault-Nissan plans to acquire Mitsubish Motors and could widen the gap with Hyundai and Kia.

“Korean companies need to come up with turnaround plans immediately,” said Chung Young-hwan, head of AlixPartners’ Seoul office. “There still is a chance to rebound if leadership and financial ability are prepared. However, [firms with yearly operating profits so low that they can’t make the interest payments of their loans] might make the situation worse in Korea.”

When Hyundai and Samsung Electronics run into a problem, relatively smaller companies that had business relationships with them will be damaged a lot more. This is exactly opposite to the trickle-down effect, which says wealthy or large companies will also benefit lower-class and smaller companies.

Korea didn’t get to enjoy the trickle-down effect even when the big companies had great performances. More large Korean companies run manufacturing plants abroad, which doesn’t get to help local smaller companies.

“Large sized companies and their labor unions have enjoyed the benefit but the wage gap between them and those who work in small to midsize firms continues to grow,” said Lee Hang-goo, a senior researcher at Korea Institute for Industrial Economics & Trade. “Korean companies need to restructure themselves immediately, or when they still have ability to do it.”

The government has recently announced executing a financial package worth 10 trillion won, including the supplementary budget, but it appears that it won’t do much to help the current economic situation.

“No one but the company itself can come up with plans to save themselves,” said Yoon Jeung-hyun, Korea’s former minister of strategy and finance. “I believe that the public should criticize and talk more seriously about strikes by labor unions that already have high salaries and power.”

Experts said this is the time for Korea to find new growth industries as Korea’s key industries are slowing.

“Korea needs to find ways to have companies like Google and Facebook establish here,” said Kwon Tae-shin, president of Korea Economic Research Institute. “The government should make Korea more environmentally friendly for business by easing some of the regulatory burdens and structural reform in the labor market.”

In fact, the government’s plans such as reforming the labor market, revitalizing the service sector, and a regulation-free zone, are stuck in the National Assembly. The Assembly’s government audit is being placed but lawmakers are focused on more things such as corporate taxes than plans to solve economic problems.

“Possible presidential candidates don’t think much about the economic challenges that the country faces, and they only criticize big companies and call for corporate tax increase,” said Kim Kwang-doo, head of the Institute for Future State. “They should debate about key factors such as ongoing corporate restructuring.”