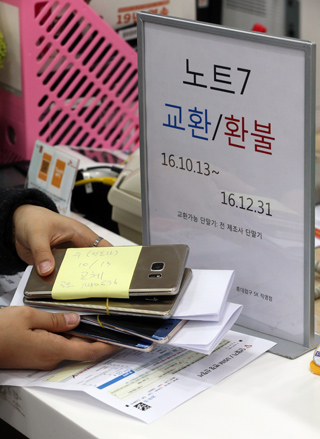 Galaxy Note7 owners turn in their smartphones at a store on Thursday. [KIM SEONG-RYONG]

Samsung Electronics announced additional estimated losses of over 3 trillion won ($2.6 billion) associated with the Galaxy Note7 debacle on Friday that could impact the company through the first quarter of next year - boosting the total loss to over 6 trillion won.

In the latest projection, the tech giant included financial fallout from upcoming quarters - the fourth of this year and next year’s first - as it measures the impact of lost sales of the Galaxy Note7.

“Samsung Electronics estimates that the discontinued sales of the Galaxy Note7 will result in a mid-3 trillion won loss in the fourth quarter and first quarter next year,” the company said in a statement.

The fourth quarter alone will face a mid 2 trillion won loss and the first quarter 1 trillion won in losses, the company said.

The announcement follows Samsung’s revised earnings forecast for the third quarter, which predicted a 2.6 trillion won reduction in profits due to the Galaxy Note7 debacle.

“We will make up for the weak earnings by expanding sales of the Galaxy S7 and Galaxy S7 Edge,” the company said, adding that it will overhaul its production safety inspections.

Market analysts are divided as to whether the Galaxy Note7 issue will have long-term damage on the company’s brand and its reputation for reliability. 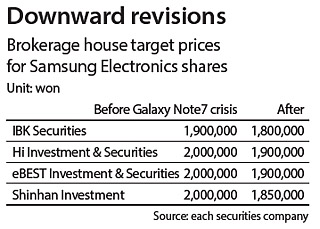 Securities companies including eBEST, Shinhan and Hi all lowered their target prices in the wake of the scandal.

“We adjusted Samsung’s target price from 2 million won to 1.9 million won because of the Note scandal,” said Eo Kyu-jin, a researcher at eBEST Investment & Securities.

Other analysts are more cautious about the impact of Galaxy Note7’s defects and Samsung’s bungled handling of an initial recall.

“Unless similar problems are encountered with Samsung’s other smartphone models,” said Yoo Jong-woo, a researcher at Korea Investment & Securities, “it will not have a major impact on the demand for the Galaxy S8 that is scheduled to come out in early 2017.”

Samsung shares slumped more than 8 percent this week, shaving about $20 billion from its market value, according to Bloomberg.

But some analysts say the Galaxy Note7 problem has been fully reflected in the recent share declines and the company’s shares will likely rebound in the coming days unless new problems are encountered.

“The concerns related to the Galaxy Note7 have been taken into account in the falls in recent days,” said Lee Jeong, an analyst at Eugene Investment & Securities.

“For the fourth quarter and beginning of 2017, we also need to pay attention to favorable market conditions in the semiconductor and display industries, a factor that will boost revenues of Samsung Electronics,” the analyst said.